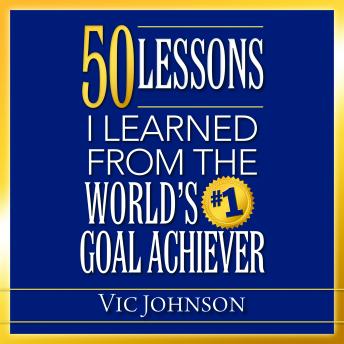 50 Lessons I Learned From the World's #1 Goal Achiever

On one eventful rainy afternoon 15 year-old John Goddard was in the kitchen and overheard his parents talking to a friend in the next room. “I wish I was John's age again,” the friend said, noting how there were many things he would have accomplished if given another chance. “I wish I could start over.”

Goddard resolved then and there not to have those kinds of regrets when he was that age. So he took out a yellow legal pad and wrote down 127 specific life goals that included:

* Traversing the entire length of the 4,132-mile Nile River
* Scaling Mount Kilimanjaro in Tanzania
* Learning to fence
* Running a five-minute mile
* Lighting a match with a .22 rifle
* Visiting the birthplace of his grandfather [Goddard]
* Playing Debussy's Claire de Lune on the piano

The rest, as they say, is history.

He not only accomplished almost all of those goals, but another 400 he set along the way, including defeating prostrate cancer.

Best-selling author Vic Johnson met Goddard in the last decade of his life after reading about him in the first Chicken Soup of The Soul book. A friendship ensued and Johnson spent hours with Goddard to learn the secrets that made him arguably the greatest achiever who ever lived.

He recounts those lessons here, and includes actions steps you can take to achieve your ultimate 'bucket list.'