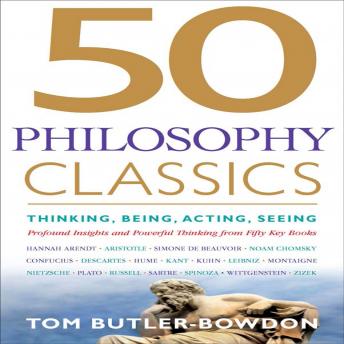 From Aristotle to Wittgenstein and Zizek, 50 Philosophy Classics provides a lively entry point to the field of philosophy. Analyses of key works by Descartes, Schopenhauer, Hegel, Heidegger, and Nietzsche also show how philosophy helped shape the thinking and events of the last 150 years. The list also includes 20th century greats including de Beauvoir, Foucault, Kuhn, and Sartre, along with contemporary philosophy including the writings and ideas of Peter Singer, Noam Chomsky, Harry Frankfurt, and Nassim Nicholas Taleb.
50 Philosophy Classics explores key writings that have shaped the discipline and impacted the real world. From Aristotle, Plato, and Epicurus in ancient times, to John Stuart Mill's manifesto for individual freedom and Ralph Waldo Emerson's struggle to understand fate as person versus the universe. Most notably, Butler-Bowdon takes readers beyond the twentieth century to introduce contemporary thinkers like Slavoj Zizek, who suggests that the fight for food and water, a biogenetic revolution, and social indicate the apocalyptic end of global liberal capitalism.

I know I am going to generlise about the author Tom Butler Bowdon and the narrator Sean Pratt but it's valid. You can close your eyes and listen to this book if you are looking to widen your horizon in philosophy but confused where to start. Like always Tom makes it easy for you to choose your next read on philosophy. This is my fifth book from the author. He has labouriously summarised and each classic and related the them to other works from other philosopher. For the narrator, I've heard so far none like him make a huge book interested through his clear pronunciation, calm voice and story telling style. He is mismerizing and now I also choose books narrated by him. In short if you come across a book by Tom and narrated by Sean, just go through it. They will glue you to headphones. Sometimes I hear them for more than an hour without being bored or distracted. Thank you Tom and Sean again.

I’m not sure that what the author attempts to do is possible: to give a summary of 50 great thinkers. Many of their ideas don’t fit into summaries. Nonetheless, it does stand as a testament to the extensive reading of the author. I think it would take me 30 years to get through his source material.

Good intro to subject of philosophy. Narrator is good too.

It's a great starter book for those who are making their mind.