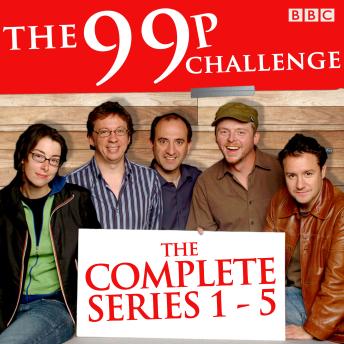 Starring the cream of UK writer/performers and comedians over its lifetime, including Simon Pegg, Sue Perkins, Miranda Hart, Nick Frost, Bill Bailey and Armando Iannucci, this is the complete and utter award-winning silly panel game that’s not about music, sport, advertising or hats.

'The laughter that’s worth every penny' - Mail On Sunday

The show was written by the writers of Friday Night Armistice and Black Books and was described by The Guardian as 'Good enough to be the successor to I'm Sorry I Haven't A Clue'.

Hear them as they spend a whole series trying to decide which stall they’d like to see at a village fete and decide it’s a toss-up between Paint The Face Of A Child On A Tiger stall and a Get The Angry Bear Down From The Cross competition. Meanwhile, they’ll be discussing such vital issues as how to beat crime, and how to sip coffee through a sausage and they'll also be pondering the question 'If an apple a day keeps the doctor away, what does a watermelon a minute do?'