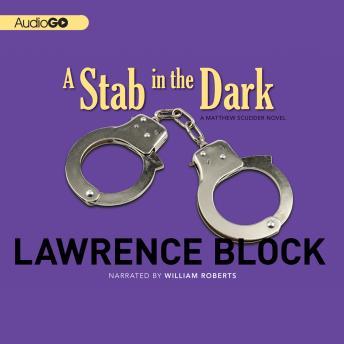 A Stab in the Dark

Ninelong years have passed since the killer last struck-nine years since eighthelpless young women were brutally slaughtered by an icepick-wielding maniac.The trail grew cold, and the book was unofficially closed on a serial killerwho stopped killing. But now the "Icepick Prowler" has confessed-but only toseven of the killings. Not only does he deny the eighth but he also has anairtight alibi.
BarbaraEttinger's family had almost come to accept that the young woman was the victimof a random killing. Now they must grapple with the shocking revelation thatnot only was her death disguised to look like the serial killer's work but hermurderer may have been someone she knew and trusted.
MatthewScudder has been hired to finally bring her slayer to justice, setting therelentless detective on the trail of a death almost a decade old, searching fora vicious murderer who is either long gone, long dead-or patiently waiting tokill again.

A Stab in the Dark

This title is due for release on December 1, 2011
We'll send you an email as soon as it is available!