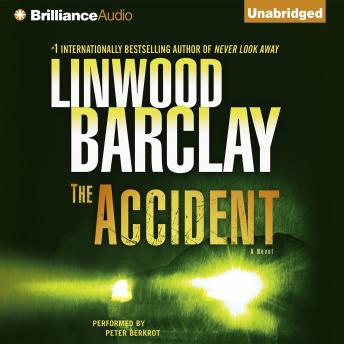 The Accident: A Novel

Glen Garber, a contractor, has seen his business shaken by the housing crisis, and now his wife, Sheila, is taking a business course at night to increase her chances of landing a good-paying job. But she should have been home by now. With their eight-year-old daughter sleeping soundly, Glen soon finds his worst fears confirmed: Sheila and two others have been killed in a car accident. Grieving and in denial, Glen resolves to investigate the accident himself—and begins to uncover layers of lawlessness beneath the placid surface of their Connecticut suburb, secret after dangerous secret behind the closed doors. Propelled into a vortex of corruption and illegal activity, pursued by mysterious killers, and confronted by threats from neighbors he thought he knew, Glen must take his own desperate measures and go to terrifying new places in himself to avenge his wife and protect his child.

I had high hopes for this one, but the story was predictable and the narrator seemed bored by the story. I'll look for more Linwood Barclay in the future, I'm not one to judge an author by one foray.

I have read almost every Linwood Barclay book I can get my hands on! I have wanted "The Accident" but for some reason I was unable to purchase it. Imagine my delight in finding it here, I can't say enough about this author and all his great books, they are all equally addictive. The intrigue, twist and turns are always enjoyable. What Linwood Barclay does to everyday , ordinary people is simply amazing. One day, that's all it takes, and the characters lives are never the same. Read his books, you won't regret it.

I loved it, an awesome read. I could listen to it again & also suggest it to others. The narrator was great as well.

Never a dull minute I hung on every word. Great storyline with jaw dropping surprise and mystery. Superb job narrating, couldn't stop listening. This one will be played again! ?????

This title is due for release on August 9, 2011
We'll send you an email as soon as it is available!