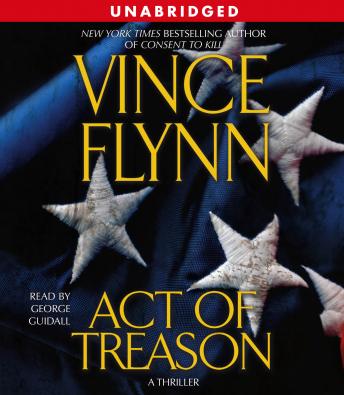 The fallout from a horrific Washington explosion has just begun, along with CIA superagent Mitch Rapp’s hunt for a killer with a personal agenda in this “fun, finger-blistering page-turner” (Star Tribune, Minneapolis) in the #1 New York Times bestselling Mitch Rapp series.

In the final weeks of a fierce presidential campaign, a motorcade carrying candidate Josh Alexander is shattered by a car bomb. Soon after the attack, Alexander is carried to victory by a sympathy vote, but his assailants have not been found. When CIA director Irene Kennedy and Special Agent Skip McMahon receive damaging intelligence on Washington’s most powerful players, they call on Mitch Rapp—the one man reckless enough to unravel a global network of contract killers on an explosive mission that leads back to the heart of our nation’s capital…and the inner sanctum of the Oval Office.

“Taut writing and [a] plausible vision of the real work of the intelligence community” (Publishers Weekly) make Act of Treason an unputdownable and heart-pounding thriller.

I am about half way through this and it moves right along with its twists and turns, none of which seems at all contrived.....I sure would like to think we have real agents like Mitch working for us in the CIA.

Awesome book! This was my first Vince Flynn book and I am an instant Mitch Rapp fan. I am going to buy the first seven books today! Alex Cross, Jason Bourne, and Agent Pendergast have nothing on Mitch Rapp!

Once I got started on Vince Flynn, I couldn't stop. I love Mitch Rapp - he says and does what we would all really like to and he doesn't necessarily have to play by the rules. I keep wondering why the movies haven't picked this series up yet since Clancy isn't writing about Jack Ryan anymore.

Once again Mitch Rapp does it again! I just can't seem to get enough of that man! A good plot, with good characters. Any book with Mitch Rapp in it ; is guaranteed to be an excellent read.

Great political drama. Not too much action, but tense the whole time.

Every Mitch Rapp book is so well written and the narration is fantastic! already onto next in series. highly recommend - smart, action, feels like it was written for this time in our political turmoil. Insightful!

I have been a fan of Vince Flynn for a long time now. This book did not disappoint. The action and suspense is terrific. Can't wait for the others on my list to come. I have "read" several of them, but it is nice to listen them being read. Gives a whole new perspective on the books.

Always have liked Mitch Rapp. He is the ultimate spy, no holds barred, willing to do anything he needs to do to get the job done.

Vince Flynn writes a good, fast thriller 9 times out of ten. This is Flynn at his best. Satisfying toi the very end, this Mitch Rapp book will not disappoint. If action, up-to-date political intrigue is what yoiu are looking for, with a healthy dollop of justice, served at exactly the correct emperature, this book is for you. George Guidall is an EXCELLENT narrator.

Vince Flynn and Mitch Rapp keep getting better. I actually felt my pulse increase while listening to this book. The narrator was excellent too. FANTASTIC!

This book was very fast-paced and interesting from the beginning. It took a little extra concentration to keep the characters straight, as I was going across country while listening to it and had to pay attention to directions, but the reader did a great job and I really enjoyed the experience.

I liked this book. It WAS a long listen but good because it was one that didn't overly described everything but as unabridged does give you the most complete story. It all came together well to create a good fiction novel of the quest for power desired by government officials and how far they will go to achieve it.

This title is due for release on October 10, 2006
We'll send you an email as soon as it is available!