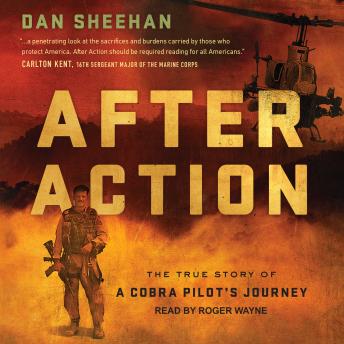 After Action: The True Story of a Cobra Pilot's Journey

Dan Sheehan is a third-generation military flyer. He was eager to test his skills as a Cobra gunship pilot in the theatre of combat-and then he got his chance, first, in East Timor, then during two tours of duty in Iraq.

The scenes in Dan's military memoir crackle with tension and excitement as we follow his path into battle. Bullets pierce their Cobras as Dan and his buddies struggle to separate enemy fighters from civilian-ultimately deciding who lives and dies. Through blinding sandstorms, the smoke of battle and chaos of low-altitude firefights at night, Dan puts us in the front seat of the Cobra-where we white-knuckle our way through barrages of enemy fire-and into his head as he makes split-second decisions that carry lasting consequences.

But there is far more to Sheehan's story than this-an important reason why he wants us to understand what military men and women experience on the front lines of war. And what they bring home.

After the adrenaline rush of combat, something inside Dan would not turn off. He was a warrior, willing and proud to serve his country and he was fortunate to come out of battle whole, time and again. But he had not escaped Iraq untouched.