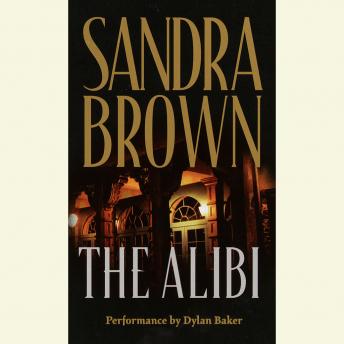 Born into a fine old Charleston family, Hammond Cross is determined to be the city's next district attorney-without sacrificing his integrity. Prosecuting the sensational murder of real estate magnate Lute Pettijohn could be his ticket into the office. Yet while Hammond anticipates his success, someone near him is plotting his downfall--

Steffi Mundell, colleague, ex-lover, and rival for the DA's office--Rory Smilow, the homicide detective without equal and Hammond's avowed enemy--the wily and beautiful Davee Pettijohn, Lute's widow and Hammond's lifelong friend, who's too honest to mourn the husband she despised--and Hammond's prime suspect, the mysterious woman who shares the secret that would be fatal to Hammond's ambitions.

For the first time in his career, he's bending the rules in favor of the suspect. All clues point to her guilt. Yet she holds in reserve the perfect alibi-Hammond Cross.

Loved this book! Great story and narrator did good job.

Another good story by Sandra Brown! The murder mystery component, as usual, gets the reader involved and supplies the twists and turns, peeling away all the facts like the layers of an onion. The romance component was believable and enticing without being too raunchy. All in all, I’ll listen again. As another reviewer said, I’m not a fan of the narrator. The producer should stick with Jonathan Davis!

Not the conclusion I had anticipated; which makes it even better.

Love her mysteries,I wish she had more! Usually they are romance but the mysteries are so much more intense and interesting.

Not her best. Story started out so slow it was hard to keep listening but then picked up and became a good story. I wasn't a fan of the narrator.

What a surprise ending. Sandra Brown always keeps you guessing.

I enjoyed this story although it was predicable. I listened when I should have been doing other things which shows that the 'who done it' story got me thoroughly involved. Well read.

The characters were too predictable. You could almost figure out the ending half way through the book. I was disappointed. Perhaps the unabridged version is more exciting.

Started a bit slow but really picked up and was a good read (listen). Twisting and not a bit predictable.

Very good. Keep me listening non stop until the end. I would never have guessed the ending and thats what I like in a book. Highly recommend

If you want to listen to a good Sandra Brown book, rent Envy. It is excellent. Alibi is not so excellent. It was so cheesy and even though it wasn't completly predictable, I knew that 1 of the 3 main characters was the murder. I couldn't wait for this selection to end.

It was an unusual twist with lifelong friends and ambition at stake. Rory Smilow is a sinster character with a secret that keeps him to be perfect in assessing the crime scene. So many hated the richest man in town who did not care who he hurt as long as he comes out on top. The one thing he did not count on was to be murdered at the local hotel. The case takes many twists with you guessing right to the end who really did the crime. Steffi and Hammond both tackle the case from both personal stand point and professional. Secrets in every avenue add to the plot. Highly recommended for the person who likes mysteries.

Very good book. This one kept you guessing the whole time. I really liked the ending.

Sanda Brown's books can be hit or miss but this one was a hit. I so enjoyed the characters and story twists. This was a nice blend of romance and suspense and after the book was over I thought, "Who thinks up this stuff?!" I would reccommend this book.

Good book. Liked the suspense. Ending was a surprise. Will look for more titles by this author!