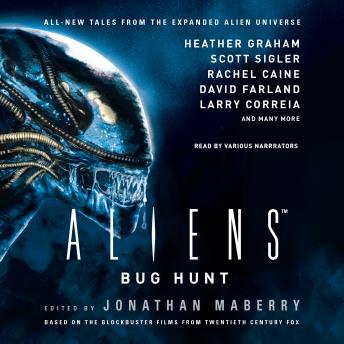 Part of The Alien™ Series

When the Colonial Marines set out after their deadliest prey, the Xenomorphs, it’s what Corporal Hicks calls a bug hunt—kill or be killed. Here are fifteen all-new stories of such “close encounters,” written by many of today’s most extraordinary authors.

Set during the events of all four Alien films, sending the Marines to alien worlds, to derelict space settlements, and into the nests of the universe’s most dangerous monsters, these adventures are guaranteed to send the blood racing—one way or another.

How do you describe this book? A veritable collection of hack amateurs writing about something that they know absolutely nothing about and trying to pass the completed work off as something it simply isn’t. Listening to this audio book was painful. Being a huge Alien and Aliens fan , having grown up with the two movies and seen each in their original theatrical run, and having never read any Alien or Aliens books other than the Alan Dean Foster novelizations of the first two movies, I was expecting something ... wow! Instead I got over ten hours of ... meh. One of the stories didn’t even make sense ... it started out being somewhat interesting only to do a complete turn around and nosedive at the very end and for no good reason whatsoever. It was infuriating. It didn’t bring me joy at the conclusion of the story, no, it made me realize that I’d never get that 20 minutes of my life back. That was just one example of how bad these stories rapidly went down in overall quality. There are only two or three stories in this anthology that are actually worth reading. There are several stories in this anthology which seem to have nothing to do with the Alien universe at all but probably had some common terms changed from the original work so that the stories would fit. Change the heroes to Colonial Marines, make the evil corporation Weyand Yutani and you could probably turn just about any short story someone handed you into an “Aliens” short story. In fact, several stories felt like someone had just grabbed an old short story of theirs and used a word processor to replace some words with familiar terms from the Alien / Aliens universe. Overall this work had a very cheap and rushed feel to it. The author of this book claims in their forward to be a huge Alien fan ... but his supervision of this project and the lackluster stories he allowed to be included in this collection proves that out of all of those who contributed to this abomination, it was the person who put this crap together and signed their name to it that was the one person who really didn’t have the first clue about the Alien universe. Stories were full of basic mistakes, used the wrong tech or equipment and most of the stories felt like they were written by middle school or junior high students. Stories felt scripted and generally felt like they had been made to follow a simple and predictable template that really was neither original or deep. There was too much whining among the heroes, too much copying of the beloved phrases from the movies all in an obvious forced attempt to verify the authenticity of the stories and failing to do just that. It felt like a bunch of children with toy guns trying to tell hardened, experienced soldiers what it was like to be in the military and expecting the veterans to believe them. I physically winced every time some story author referred to a weapon’s magazine as a “clip”. The lack of knowledge of the base subject, the lack of a basic understanding of the operation of equipment as established and presented in the films and even a lack of understanding of basic physics is all apparent as you plod through this tedious collection. For one memorable example ... One story in the anthology takes place in the Andromeda galaxy. Not our Milky Way galaxy but rather the Andromeda galaxy which is the next closest GALAXY. Not star system but ... galaxy. Now, gIven that, the Andromeda galaxy is 2.5 million light years away and given that the fastest ship we know of in Aliens, the Sulaco, can make .75 light years per day in hyperspace, you’re looking at about a 9267 year journey to the Andromeda galaxy ... one way ... and that is from the rim of the Milky Way to the rim of Andromeda. It would take a pretty long time to go from Earth to the edge of the Milky Way in the Sulaco, let alone hop on over to another entire galaxy but you get the idea. Talk about failing to understand what you’re writing about... most of the authors who contributed to this Charlie Foxtrot really didn’t have any understanding of what they were writing about... and it shows. Man, does it show. Now you can see why I believe that most of these stories were nothing other than old rejects from other projects or anthologies. In order to get the stories into this anthology, the authors of the stories simply fired up their word processors and did a quick term swap in the rejected story for familiar terms we know and love. That way, the author could pound a square peg into a round hole and include a story that originally had nothing to do with the Aliens universe in this Aliens anthology. I blame the author of this anthology. The guy who put this steaming pile of literary fecal matter together and who then tried to pass this inexcusable insult to our intelligence off as something in the Alien / Aliens universe is the guy who owes Alien and Aliens fans everywhere a huge effing apology for both his failure and the failure of those he solicited to write this assortment of inexcusable nonsense. He claims in his forward that he had to turn down a whole lot of offers of stories to include in this anthology. My question is ... if these stories in the final work were the best out of those submitted then I’d really hate to see what didn’t make the cut.

The stories are excellent and add a great depth and diversity to the alien universe. The Narration is very good but on occasion several character voices blend into each other and make it tricky to work out who says what

Multiple narrators makes this book a good one to listen to.

This title is due for release on May 31, 2018
We'll send you an email as soon as it is available!