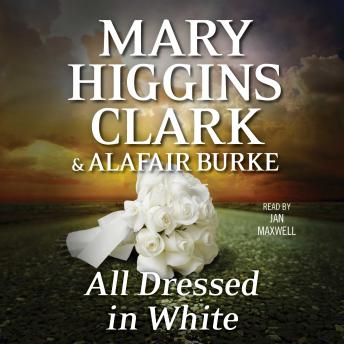 All Dressed in White: An Under Suspicion Novel

#3 of Under Suspicion Novels

The second in the thrilling New York Times bestselling series from Mary Higgins Clark and Alafair Burke, follows television producer Laurie Moran as she investigates the cold case of a bride who went missing days before her wedding.

Five years ago, Amanda Pierce was excitedly preparing to marry her college sweetheart. She and Jeffrey had already battled through sickness and health, although their livelihoods looked set as Amanda was due to inherit her father’s successful garment company.

Then Amanda disappeared the night of her bachelorette party.

In present-day New York, Laurie Moran realizes a missing bride is the perfect cold case for her Under Suspicion television series to investigate. By recreating the night of the disappearance at the wedding’s Florida resort with Amanda’s friends and family, Laurie hopes to solve the case. Laurie and her Under Suspicion host Alex Buckley soon find themselves overwhelmed with theories and rumors about the “beloved” bride from those who were involved with the wedding, including Amanda’s former fiancé, a jealous sister, and plenty of playboy groomsmen.

One thing is certain, whoever was behind Amanda’s vanishing plans to keep the truth hidden “until death do they part.”

As an Alafair Burke fan I enjoyed the second book with Alafair and Mary Higgins Clark. Great combination of writing styles and thoughtful character development.

Great book! I enjoyed the narration. Will definitely get another book by this author!

I am enjoying Reading this new series "Under Suspicion". I think Laurie is interesting and seems to get to the real crime and tends to solve most of her undertakings. It will b interesting to follow her and see if she ends up with Alex.