All In: The Blackstone Affair Part 2 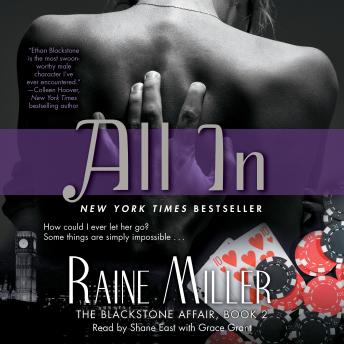 The second part in The Blackstone Affair series! Looming danger. A love worth fighting for. A man who’ll go all in.

Ethan Blackstone has a problem on his hands. He’s broken Brynne’s trust and she’s left him. He’s unwilling to live without her and isn’t giving up—he’s dead-set on getting his beautiful American girl back. The passion between them was explosive, but the secrets they hid from each other are dark and chilling and are powerful enough to destroy their shot at a life together. With political threats now directed at Brynne, Ethan is running out of time and will need to gather all his strength and agility to protect her from the dangers that could take her away from him forever. Will Ethan be able to save Brynne from a past that keeps her locked in fear? Will he ever feel the warmth of her touch, the solidity of her trust again? This is a lovestruck man who is willing to do whatever it takes to possess the heart of the woman he loves. He’ll go to any lengths to protect her. He’ll go all in. Here is the fiery story of what happens when two people surrender to a love so great it can heal the scars of the past and give way to a life of pure, rapturous ecstasy.

All In: The Blackstone Affair Part 2

This title is due for release on May 14, 2013
We'll send you an email as soon as it is available!