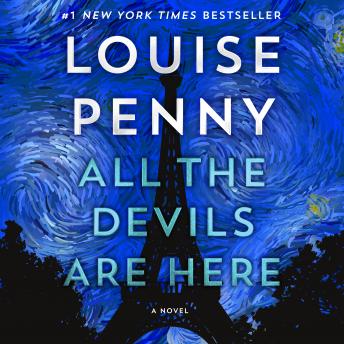 All the Devils Are Here: A Novel

In All the Devils Are Here, the 16th novel by #1 bestselling author Louise Penny finds Chief Inspector Armand Gamache of the Sûreté du Quebec investigating a sinister plot in the City of Light.

On their first night in Paris, the Gamaches gather as a family for a bistro dinner with Armand’s godfather, the billionaire Stephen Horowitz. Walking home together after the meal, they watch in horror as Stephen is knocked down and critically injured in what Gamache knows is no accident, but a deliberate attempt on the elderly man’s life.

When a strange key is found in Stephen’s possession it sends Armand, his wife Reine-Marie, and his former second-in-command at the Sûreté, Jean-Guy Beauvoir, from the top of the Tour d’Eiffel, to the bowels of the Paris Archives, from luxury hotels to odd, coded, works of art.

It sends them deep into the secrets Armand’s godfather has kept for decades.

A gruesome discovery in Stephen’s Paris apartment makes it clear the secrets are more rancid, the danger far greater and more imminent, than they realized.

Soon the whole family is caught up in a web of lies and deceit. In order to find the truth, Gamache will have to decide whether he can trust his friends, his colleagues, his instincts, his own past. His own family.

For even the City of Light casts long shadows. And in that darkness devils hide.

'Bathurst superbly manipulates tone, volume, and pace to highlight this range of emotions. Paris is described beautifully, and Bathurst lingers over these descriptive passages that will speak to any traveler’s soul...' -- Booklist, starred review

The narrator is spot on! He kept the voices believable and easily discernable while he read expertly. As always, another great work by Louise Penny.

Louise Penny hits another home run! Twists and turns and surprises! Thanks for keeping us guessing and wanting more!

Fabulous! An engaging story; characters we know and enjoy---in a different environment, with more background information, which freshened up the story---and a terrific narration. Perhaps the very best we've ever heard.

I loved this book and the narrator’s pronunciation of French expressions and places. One of Louise Penny’s best!!

My favorite author and first time for listening to audiobook by her. The narrator did an excellent job

The desire for money and power is todays world Ms Penny can take your emotions and whirl them into the wind This reader Mr. Bathurst is excellent My reasoning and forecasting were on a roller coaster The book was a step above great

Louise Penny weaves characters in and out of a suspenseful story like no one else. We've come to know the Ganache family and their Three Pines neighbors intimately. Setting the story in Paris and adding new characters was a great way to continue the story line. Louise Penny and Robert Bathurst are perfection!

Love the writing. Love the narrator.

I'm a big fan of Louise Penny, but I just found this one pretty far fetched. Did really buy the portrayal/behavior of the men in this book. The narrator, while usually spot on, had a hard time with children and made Daniel sound so whiney as to be unsympathetic. I may have read too many. The duck and f*ck jokes are getting tedious.

As always, Louise Penny immediately drew me in with her captivating storytelling. I thought I would miss Three Pines, but it turns out that no matter where the Gamaches are, there is an awesome story to be told, filled with intriguing characters and delightful revelations. I am a fan!