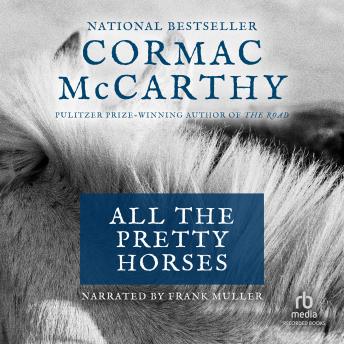 All the Pretty Horses

Cormac McCarthy is a quiet, unassuming presence in American fiction today, but like the slow, measured voices of many of his characters, he speaks with an authority and conviction that demands an audience. All the Pretty Horses, McCarthy's sixth novel, is a cowboy odyssey for modern times. Set in the late 1940s, it features the travels and toils of a 16-year-old East Texan named John Grady Cole, caught in the agonizing purgatory between adolescence and adulthood. At the start of the novel, Cole's grandfather has just died, his parents have permanently separated, and the family ranch, upon which he had placed so many boyish hopes, has been sold. Rootless and increasingly restive, Cole leaves Texas, accompanied by his friend Lacey Rawlins, and begins a journey across the vaquero frontier into the badlands of northern Mexico. In spite of its hard realities and spare telling, All the Pretty Horses is a lyrical and richly romantic story, chronicling-along with the erosion of the frontier-the loss of an era.

Perfect audiobook driving the long hours across the Sonoran desert. The history of the Mexican war and status of Mexican women told by the Senorita was beautifully written and read by Frank Miller. Great story of the American cowboy, what it was to be an American man.

Absolutely amazing story and writing I could have finished it in one sitting. Great narration too.

Enjoyed reading this book very much!

One of my favorite books. Beautifully read by Frank Muller.

Great book. The narrator spoke too low and even with the volume all the way up I had a hard time hearing or understanding what he said most of the book.

This title is due for release on August 30, 2013
We'll send you an email as soon as it is available!