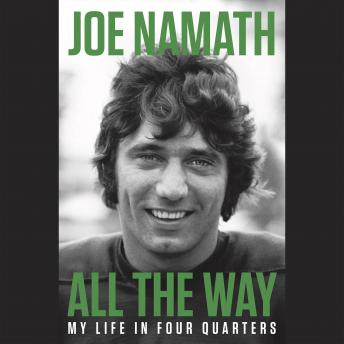 All the Way: My Life in Four Quarters

The NFL icon who first brought show business to sports shares his life lessons on fame, fatherhood, and football.
Three days before the 1969 Super Bowl, Joe Namath promised the nation that he would lead the New York Jets to an 18-point underdog victory against the seemingly invincible Baltimore Colts. When the final whistle blew, that promise had been kept.

Namath was instantly heralded as a gridiron god, while his rugged good looks, progressive views on race, and boyish charm quickly transformed him - in an era of raucous rebellion, shifting social norms, and political upheaval - into both a bona fide celebrity and a symbol of the commercialization of pro sports. By 26, with a championship title under his belt, he was quite simply the most famous athlete alive.

Although his legacy has long been cemented in the history books, beneath the eccentric yet charismatic personality was a player plagued by injury and addiction, both sex and substance. When failing knees permanently derailed his career, he turned to Hollywood and endorsements, not to mention a tumultuous marriage and fleeting bouts of sobriety, to try and find purpose. Now 74, Namath is ready to open up, brilliantly using the four quarters of Super Bowl III as the narrative backbone to a life that was anything but charmed.

As much about football and fame as about addiction, fatherhood, and coming to terms with our own mortality, All the Way finally reveals the man behind the icon.

All the Way: My Life in Four Quarters