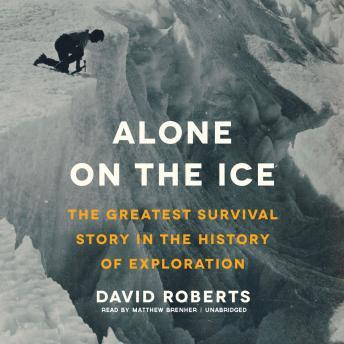 Alone on the Ice: The Greatest Survival Story in the History of Exploration

His two companions were dead, his food and supplies had vanished in a crevasse, and Douglas Mawson was still one hundred miles from camp.
On January 17, 1913, alone and near starvation, Mawson, leader of the Australasian Antarctic Expedition, was hauling a sledge to get back to base camp. The dogs were gone. Now Mawson himself plunged through a snow bridge, dangling over an abyss by the sledge harness. A line of poetry gave him the will to haul himself back to the surface.
Mawson was sometimes reduced to crawling, and one night he discovered that the soles of his feet had completely detached from the flesh beneath. On February 8, when he staggered back to base, his features unrecognizably skeletal, the first teammate to reach him blurted out, "Which one are you?"
This thrilling and almost unbelievable account establishes Mawson in his rightful place as one of the greatest polar explorers and expedition leaders.

Alone on the Ice: The Greatest Survival Story in the History of Exploration

This title is due for release on January 28, 2013
We'll send you an email as soon as it is available!