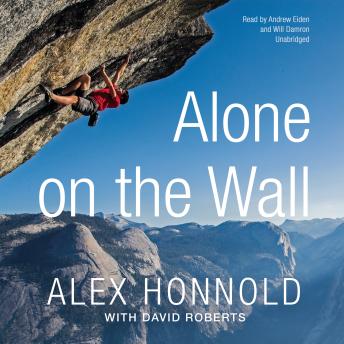 Alone on the Wall

Narrated By: Andrew Eiden, Will Damron

Only a few years ago, Alex Honnold was little known beyond a small circle of hardcore climbers. Today, at the age of thirty, he is probably the most famous adventure athlete in the world. In that short time, he has proven his expertise in many styles of climbing and has shattered speed records, pioneered routes, and won awards within each discipline. More spectacularly still, he has pushed the most extreme and dangerous form of climbing far beyond the limits of what anyone thought was possible.

Free soloing, Honnold's specialty, is a type of climbing performed without a rope, a partner, or hardware?such as pitons, nuts, or cams?for aid or protection. The results of climbing this way are breathtaking, but the stakes are ultimate: if you fall, you die.

In Alone on the Wall, Honnold recounts the seven most astonishing climbing achievements so far in his still-evolving career. He narrates the drama of each climb, along with reflective passages that illuminate the inner workings of his highly perceptive and discerning mind. We share in the jitters and excitements he feels waking in his van (where he lives full time) before a climb; we see him self-criticize in his climbing journal (a veritable bible for students of the sport); and we learn his secrets to managing fear. Veteran climber and award-winning author David Roberts writes part of each chapter in his own voice, and he calls on other climbers and the sport's storied past to put Alex's tremendous accomplishments in perspective.

Whenever Honnold speaks in public, he is asked the same two questions: "Aren't you afraid you're going to die?" and "Why do you do this?" Alone on the Wall takes us around the world and through the highs and lows in the life of a climbing superstar to answer those fascinating questions. Honnold's extraordinary life, and his idiosyncratic worldview, have much to teach us about risk, reward, and the ability to maintain a singular focus, even in the face of extreme danger.

"Alex Honnold's climbing feats are astonishing. They are also absolutely horrifying. Reading about some of his ascents made me physically ill. As this riveting book makes clear, however, Honnold is neither crazy nor reckless. Alone on the Wall reveals him to be an utterly unique and extremely appealing young man."-Jon Krakauer, author of Into the Wild, Into Thin Air, and Missoula

Alone on the Wall

This title is due for release on November 9, 2015
We'll send you an email as soon as it is available!