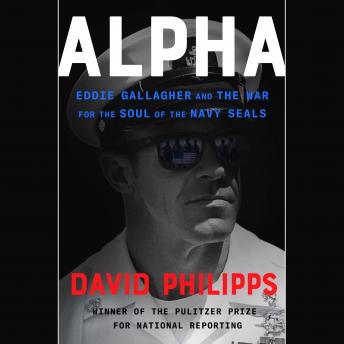 Alpha: Eddie Gallagher and the War for the Soul of the Navy SEALs

An “infuriating, fast-paced” (The Washington Post) account of the Navy SEALs of Alpha platoon, the startling accusations against their chief, Eddie Gallagher, and the courtroom battle that exposed the dark underbelly of America’s special forces—from a Pulitzer Prize–winning reporter

WINNER OF THE COLORADO BOOK AWARD • “Nearly impossible to put down.”—Jon Krakauer, New York Times bestselling author of Where Men Win Glory and Into the Wild

In this “brilliantly written” (The New York Times Book Review) and startling account, Pulitzer Prize–winning New York Times correspondent David Philipps reveals a powerful moral crucible, one that would define the American military during the years of combat that became known as “the forever war.”

When the Navy SEALs of Alpha platoon returned from their 2017 deployment to Iraq, a group of them reported their chief, Eddie Gallagher, for war crimes, alleging that he’d stabbed a prisoner in cold blood and taken lethal sniper shots at unarmed civilians. The story of Alpha’s war, both in Iraq and in the shocking trial that followed the men’s accusations, would complicate the SEALs’ post-9/11 hero narrative, turning brothers-in-arms against one another and bringing into stark relief the choice that elite soldiers face between loyalty to their unit and to their country.

One of the great stories written about American special forces, Alpha is by turns a battlefield drama, a courtroom thriller, and a compelling examination of how soldiers define themselves and live with the decisions in the heat of combat.

Stunningly well done! Hats off to David Phillips who wove together the truth. To all those in Alpha who stuck to their guns and spoke truth to power deserve a medal! Please know you are the true heroes!

This was a well organized book with verified source documents to back up the "alleged" issues. How others were able to allow this to go virtually unpunished is shocking.