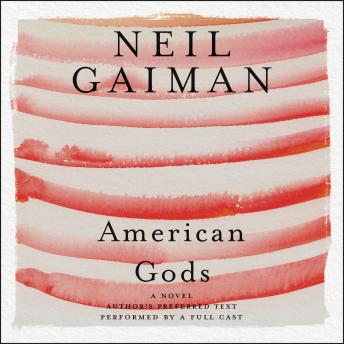 Locked behind bars for three years, Shadow did his time, quietly waiting for the day when he could return to Eagle Point, Indiana. A man no longer scared of what tomorrow might bring, all he wanted was to be with Laura, the wife he deeply loved, and start a new life.

But just days before his release, Laura and Shadow’s best friend are killed in an accident. With his life in pieces and nothing to keep him tethered, Shadow accepts a job from a beguiling stranger he meets on the way home, an enigmatic man who calls himself Mr. Wednesday. A trickster and a rogue, Wednesday seems to know more about Shadow than Shadow does himself.

Life as Wednesday’s bodyguard, driver, and errand boy is far more interesting and dangerous than Shadow ever imagined. Soon Shadow learns that the past never dies . . . and that beneath the placid surface of everyday life a storm is brewing—an epic war for the very soul of America—and that he is standing squarely in its path.

I read the original version over a decade ago, and then listened to this revised version over the last few days. It is long, but it is well worth the time. You get so caught up in the story, you don't realize how much time has passed. The narration is great, the various voices for the characters are great. I may even listen to again in a few months or so.

There is nothing I can say about this book that it doesn't say for itself. I find myself listening to this book over and over. Thank you Neil

One of the best books of the last 20 years. Garment weaves a masterful story from human mythology.

Read the book before you watch the show. This is perhaps one of the best stories I have heard.

Interesting story, keeps your attention. To me the premise is a good one but essentially missed the mark by picking pretty much not American Gods, still, an enjoyable read

The narrators really bring this book to life. I had read the original release many years ago and the new material in this version was a treat.

One of the finest pieces of fiction I have read, engrossing and entertaining in equal parts graphic, sexual, disturbing, and humorous.

I really loved this book. The narrator and voice actors were phenomenal.

Awesome book! The premise is so interesting and the characters so realistic and vibrant. The narration and voice acting is marvelous as well. I loved every bit of it.

Riveting book. I usually listen at my desk at work. It was hard not to stay on task with this one

I purchased this book mostly because of the great reviews. Started listening to. Couldn’t get past 10 minutes. Could make heads or tails of what was going on. So I waited a couple of weeks tried again. Fell asleep listening. Left it alone another week. Tried again. Listened another 10 minutes. Gave up. Just not my type of book. Hats off to those who can comprehend what is going on and what is meant by the title American gods

It felt a bit unfocused. Great idea and I finished the book but felt restless to get it over with at times.

well worth the time listening to this

I had watched the TV series and was not overly impressed, but the basis seemed intriguing. The book was great.

Completely lost interest as it just kept going and going with no plot. It is well written so maybe I just missed the point but I gave up about 1/2 way in.

This book is amazing! I've loved everything I've read by this author!

Good story performed by a decent crew, including the author's reading of parts. Enjoyed it very much.

I love the way this was written and how all the characters interacted. it had an awesome twist and I was intensely caught up!

A meandering work that travels far, wide back and forth. Great fun, amazing cast and gripping story. My new favorite. Heavy on 'mythology', twisted conjunctions, I may listen to it again in short order!

i didn't not enjoy the plot or the characters. the deus ex machina was thin at best.

Gaimen only writes great books with good pacing and a dry wit. American Gods is a great read and i only wish it were longer.

The book is a good, solid story with engaging characters. It was my first audiobook, and I thoroughly enjoyed it. The voice acting by the cast was terrific and nuanced. The narration was seamless and sounded natural, rather than stilted or awkward. Great version of an engrossing story!

The full cast recording is excellent! The voice direction is top notch. As for the book itself it's an oddly-paced thriller, but it-s well worth the read/hear.

It was good. Liked the narration.

Loved it, the guys at work keep talking about it as well.

There are so many amazing parts of this book, but as it neared its end, I wasn't sure I'd like it as a whole. Having finished it now, I can say I was wrong: I thoroughly enjoyed this novel, and it's completely worth buying and listening to it.

Fantastic listen! I really enjoyed the full cast for the novel.

Great book and great narration! A whole cast for every character gives a unique feel to bring this book to life.

Took me a while to finish this book via reading so I gave it one last chance and listened to the audiobook version of it!! And it was worth it!!! I enjoyed this audiobook so much. Great narrator and excellent casting!!

This title is due for release on June 21, 2011
We'll send you an email as soon as it is available!