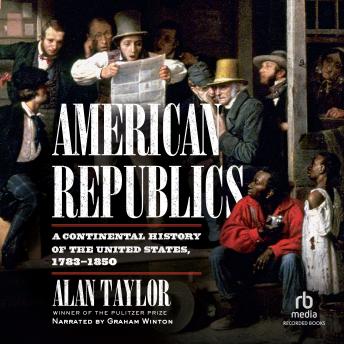 American Republics: A Continental History of the United States 1783-1850

From a Pulitzer Prize–winning historian, the powerful story of a fragile nation as it expands across a contested continent.

In this beautifully written history of America’s formative period, a preeminent historian upends the traditional story of a young nation confidently marching to its continent-spanning destiny. The newly constituted United States actually emerged as a fragile, internally divided union of states contending still with European empires and other independent republics on the North American continent. Native peoples sought to defend their homelands from the flood of American settlers through strategic alliances with the other continental powers. The system of American slavery grew increasingly powerful and expansive, its vigorous internal trade in Black Americans separating parents and children, husbands and wives. Bitter party divisions pitted elites favoring strong government against those, like Andrew Jackson, espousing a democratic populism for white men. Violence was both routine and organized: the United States invaded Canada, Florida, Texas, and much of Mexico, and forcibly removed most of the Native peoples living east of the Mississippi. At the end of the period the United States, its conquered territory reaching the Pacific, remained internally divided, with sectional animosities over slavery growing more intense.

Taylor’s elegant history of this tumultuous period offers indelible miniatures of key characters from Frederick Douglass and Sojourner Truth to Elizabeth Cady Stanton and Margaret Fuller. It captures the high-stakes political drama as Jackson and Adams, Clay, Calhoun, and Webster contend over slavery, the economy, Indian removal, and national expansion. A ground-level account of American industrialization conveys the everyday lives of factory workers and immigrant families. And the immersive narrative puts us on the streets of Port-au-Prince, Mexico City, Quebec, and the Cherokee capital, New Echota.

Absorbing and chilling, American Republics illuminates the continuities between our own social and political divisions and the events of this formative period.