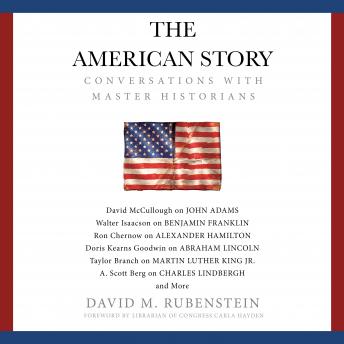 In revealing conversations with our greatest historians, cofounder of The Carlyle Group and patriotic philanthropist David M. Rubenstein takes listeners on a sweeping journey across the grand arc of the American story.

These lively dialogues present some of the biggest names in American history exploring the subjects they intimately know and understand. You’ll hear live recordings of:

Through his popular program The David Rubenstein Show, David Rubenstein has established himself as one of today’s most thoughtful interviewers. Now, in The American Story, David shares almost a dozen interviews that capture the brilliance of today’s most esteemed historians, as well as the souls of their subjects. The audiobook presents archival recordings of these interviews and features new introductions by Rubenstein as well as a foreword by Librarian of Congress Carla Hayden, the first woman and the first African American to lead our national library.

Through these captivating exchanges, these bestselling and Pulitzer Prize–winning authors offer fresh insight on pivotal moments from the Founding Era to the late 20th century.

Awful. Wish I could get my money back.