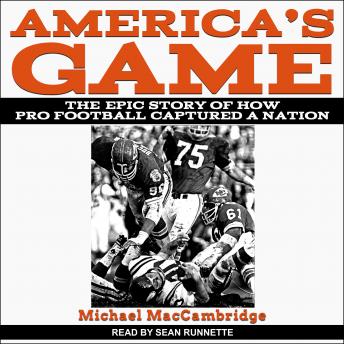 America's Game: The Epic Story of How Pro Football Captured a Nation

It's difficult to imagine today-when the Super Bowl has virtually become a national holiday and the National Football League is the country's dominant sports entity-but pro football was once a ramshackle afterthought on the margins of the American sports landscape. In the span of a single generation in postwar America, the game charted an extraordinary rise in popularity, becoming a smartly managed, keenly marketed sports entertainment colossus whose action is ideally suited to television and whose sensibilities perfectly fit the modern age.

America's Game traces pro football's grand transformation, from the World War II years, when the NFL was fighting for its very existence, to the turbulent 1980s and 1990s, when labor disputes and off-field scandals shook the game to its core, and up to the sport's present-day preeminence. A thoroughly entertaining account of the entire universe of professional football, from locker room to boardroom, from playing field to press box, this is an essential book for any fan of America's favorite sport.

America's Game: The Epic Story of How Pro Football Captured a Nation