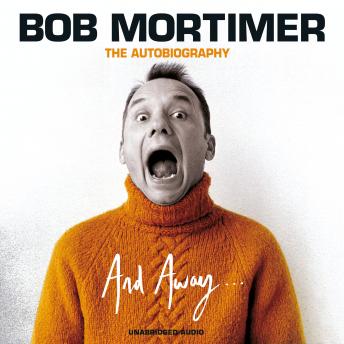 The number one bestseller and Sunday Times Humour Book of the Year by national treasure Bob Mortimer.
‘The most life-affirming, joyful read of the year’ - Sunday Times

‘A triumph’ – Daily Mail
Bob Mortimer’s life was trundling along happily until suddenly in 2015 he was diagnosed with a heart condition that required immediate surgery and forced him to cancel an upcoming tour. The episode unnerved him, but forced him to reflect on his life so far. This is the framework for his hilarious and moving memoir, And Away… Although his childhood in Middlesbrough was normal on the surface, it was tinged by the loss of his dad, and his own various misadventures (now infamous from his appearances on Would I Lie to You?), from burning down the family home to starting a short-lived punk band called Dog Dirt. As an adult, he trained as a solicitor and moved to London. Though he was doing pretty well (the South London Press once crowned him ‘The Cockroach King’ after a successful verdict), a chance encounter in a pub in the 1980s with a young comedian going by the name Vic Reeves set his life on a different track. And now, six years on, the heart condition that once threatened his career has instead led to new success on BBC2’s Gone Fishing. Warm, profound, and irrepressibly funny, And Away… is Bob’s full life story (with a few lies thrown in for good measure.)

I enjoyed the book. Some very interesting anecdotes.

Have sat by the pool or on the beach on holiday laughing my head off at this. Getting very strange looks !! Not the greatest narration ( which does surprise me for Bob being an entertainer ) but nonetheless a great listen. When people talk of who out of history they would have diner with ….. I would settle for a day fishing with this chap

Love Bob’s humour, so glad to have had the audio book while on holiday. Unfortunately Bob is not a smooth reader, somewhat stilted, but a very funny and eventful life..

A laugh a minute( or less)depending on how fast you read.

genuine and funny. if you like Bob Mortimer this is well worth listening to

I have been dealing with a family crisis over the last week and this book has kept me sane. It’s made me laugh when I haven’t felt like laughing!

This title is due for release on September 16, 2021
We'll send you an email as soon as it is available!