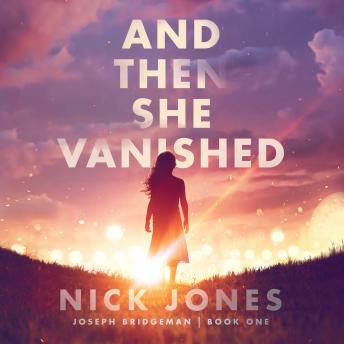 And Then She Vanished

#1 of The Joseph Bridgeman Series

He only looked away for a second.

Still haunted by the disappearance of his little sister, Amy, over twenty years ago, Joseph Bridgeman’s life has fallen apart. When a friend talks him into seeing hypnotherapist Alexia Finch to help with his insomnia, Joseph accidentally discovers he can time travel. His first trip only takes him back a few minutes, but his new-found ability gives him something he hasn’t felt for the longest time: hope.

Joseph sets out to travel back to the night Amy went missing and save her. But after several failed attempts, he discovers the farther back he travels, the less time he gets to stay there. And the clock is ticking.

With the help of Alexia, Joseph embarks on a desperate race against the past to save his sister. Can he master his new skill and solve the mystery of Amy’s disappearance before it’s too late?

Previously released as The Unexpected Gift of Joseph Bridgeman, this updated version includes extra chapters, new plotlines, and even deeper character development. It makes way for an expanded vision of the Joseph Bridgeman Series, with the first four books released in 2021 and 2022.

What a pleasant surprise!! I selected this book from my VIP Rewards. I didn’t have my reading glasses when I chose this book. I chose it based on star rating, title and cover. I’m thrilled! This fast paced novel is exactly the type of novel I would normally choose! The time travel sci-fi angle mixed with the characters hooked me right from the start!! The main character has such a witty sense of dry humour! I found myself laughing out loud!! The narrator is fantastic!! He’s very charismatic! I give this novel a definite 10/10! I’m onto the 2nd book in this 4 book series (and I don’t have any qualms paying for it in credits!!) Enjoy!! ❤️❤️

This was a refreshingly different storyline than what I have been reading lately and that was wonderful! I didn't know this was part of a series, I must read more! The author's sense of humor is phenomenal and the narrator's delivery of this was immaculate!!

What a neat surprise! This book was so good, I had to keep listening! Good job.

This book was surprisingly good! The narrator was the best I've ever heard, with faultless accents and numerous characters. The story is very gripping, and there's no telling where it's going to take you. I binged it in a very short amount of time, even though I didn't want it to end! The narration is So important in an audiobook, and this narrator was amazing.

Such a great book. The narrator is fantastic too.

Great story, very well written! I thoroughly enjoyed this. The narrator was fantastic. One can forgive the American accent for a British character because this narrator did such an amazing job.

I LOVEDDDD ITTTT!!! Not what I was expecting but I absolutely loved it.

Great storytelling with a fast pace. Can’t wait to hear the next installment. Lots of great quotes that I had to write down for future use. You think you know which way the story is going then it satisfyingly contorts your expectations. Just found this author and I am thoroughly impressed.

A time travel novel like no other.. Really enjoyed it. The author has a great sense of humour. Excellent narration. Don’t forget you can speed up the narration.

Loved it! So excited that there is more to come. Want to binge these so bad. Can't wait!

It was a good decision to offer this book as the free VIP selection. I was hooked almost from the start. It was a very creative story with likable, well-defined characters. I just bought the second book in the series and plan to read them all. The reader is good, even if his female voices are a little weak. But overall it’s a fantastic listen that I would highly recommend!

I echo Christine P's review. We weren't sure what we had when I picked this as a VIP Reward, but it hooked both my wife and me and kept us listening. We are looking forward to the next book in the series, and the reader!

I was surprised by this story line. Not what I expected, but I enjoyed it very much.

Starts off slow and sad but it gets really good. One of the best series of books

I can’t get past the American narrator for a protagonist who is supposed to be British. What are they thinking? He does a good British accent for other characters so he just should have done the entire book with the pretend accent. It makes zero sense to me

I was pleasantly surprised. It was fun, well narrated (I am not a native English speaker) and I downloaded the second book in the series already!

Same as everyone else it seems! Didn't expect such a gem in the VIP books, LOVED the narrator, great story, couldn't tell the end until I reached it, laughed out loud a few times, couldn't put it down but also didn't want it to end! Recommend it for sure, most likely will buy #2 in the series too!

This was one of the worst books I have ever read. I’m always invested. Once I start a book I will stay until the end. I was disappointed.

I downloaded this book as a monthly reward, and did not regret it! This is a nicely written and narrated book. It’s the first in a series, and I’m definitely planning to read on!

Disappointed with this title. I listened for a few hours and just couldn\'t get into it. Also did not like the narration. Sorry - personal taste

Even though I am not one for time-travel genres, this was a great story line! Kept me interested and listening constantly. What I was not so fond of was the narrator. The story takes place in England so I would have expected an English accented narrator which would have made my listening experience more enjoyable. His voice seemed a bit flat, or monotone, for my taste.

I don't usually read this kind of book and wasn't sure about it, especially as the narrator sounded exactly like one of the readers from the Jodi Picoult book I'd just finished listening to. It was very disconcerting as I'd completely bought into the last character and I couldn't differentiate them. I stopped listening for a couple of weeks and picked it up again. Although the American accent of a bloke ostensibly from Chicester still made me a little dubious, Porter is such a good reader that I was soon carried away by the story and listened to it in one great binge. There were a few parts where I felt some tighter editing would have enhanced the narrative (hence 4 not 5) but the overall pace and arc were not spoiled. I definitely will be reading/listening to the further adventures of Joseph Bridgerman, and hope he eventually manages to sync up with the love of his life.

loved it, so many unexpected twists. looking forward to the rest of the series

Wonderful narrator reading a pretty bad story. I only finished it as the narrators voice is so good.

The narrator is the best I've heard. Love his narration. The story is questionable? Several times I wanted to quit. But I'm glad to have stuck it out. The ending is worth it. One major disappointment, but I'm not going to spoil the story for you by telling you what it is.

Good book. Character was believable and story interest was good. The narrator did a great job.

This was a great read/listen. Brother takes younger sister to a carnival. Suddenly she disappears, Joe and his family are destroyed by the mystery. When Joe discovers he can time travel (jump), he becomes determined to go back and rescue his beloved sister. There is nothing easy, but with friends and determination he keeps learning and trying. There will be more books in the series.