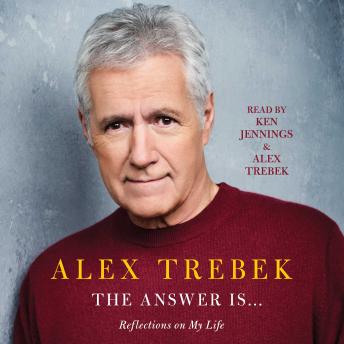 When he debuted as the host of Jeopardy! in 1984, Alex Trebek became something like a family member to millions of television viewers, bringing entertainment and education into their homes five nights a week. In 2019, he made the stunning announcement that he had been diagnosed with Stage IV pancreatic cancer. What followed was an incredible outpouring of love and kindness. Social media was flooded with messages of support, and the Jeopardy! studio received boxes of cards and letters offering guidance, encouragement, and prayers.

For more than three decades, Trebek had resisted countless appeals to write a book about his life. Yet he was moved so much by all the goodwill, he felt compelled to finally share his story. “I want people to know a little more about the person they have been cheering on for the past year,” he writes.

The book combines illuminating personal anecdotes with Trebek’s thoughts on a range of topics, including marriage, parenthood, education, success, spirituality, and philanthropy. Trebek also addresses the questions asked most often by Jeopardy! fans, such as what prompted him to shave his signature mustache, his insights on legendary players like Ken Jennings and James Holzhauer, and his opinion of Will Ferrell’s Saturday Night Live impersonation. The book uses a novel structure inspired by Jeopardy! and features dozens of never-before-seen photos that candidly capture Trebek over the years.

This wise, charming, and inspiring book is further evidence of why Trebek has long been considered one of the most beloved and respected figures in entertainment.

Well read and well written. What an ordinary yet extraordinary man!!

I laughed and I cried through this book. There are some wonderful stories. I cried knowing Mr Trebek is no longer here but smiled at his attitude towards both his life and death. Ken did a wonderful job of reading the book although I wish Mr trebek had been able to do it all. The banter between him and Ken when changing over for rest breaks was fantastic and I am glad they became such good friends. My only complaint is the chapters were too short! All in all a great reading, book and story and I thnk both men for doing this. Highly recommended

A truly touching, humble and honest reflection of a great champion. Simple narrative.

This was a very endearing and insightful story about a very dear person! And Ken's narration was the perfect touch!

Well worth the listen!

I loved it. It is like sitting down with an old dear friend and listening to the events of his and his reflections which are humorous and informative. It ended too soon but I hope we have the pleasure of years more of Alex in our lives.

I am so happy that I read this book! His words left me in shock, in laughter, and in tears. I feel like I know him better now than before.