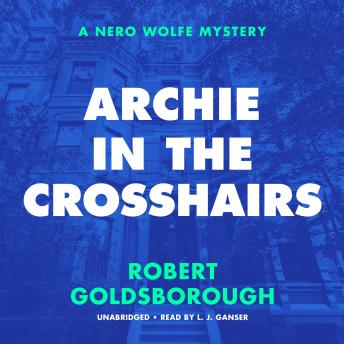 Archie in the Crosshairs: A Nero Wolfe Mystery

#10 of The Nero Wolfe Mysteries

Mystery fans will devour this entry into the classic, wisecracking Nero Wolfe series, in which Wolfe must track down a dangerous gunman—or risk losing his right-hand man.

Archie Goodwin is chipper as he strolls home from his weekly poker game, money in his pocket and a smile on his lips. He has just reached Nero Wolfe’s stately brownstone on West Thirty-Fifth Street when a sedan whips around the corner and two gunshots ring out, nearly hitting Goodwin. It is a warning, and the message is clear: the next bullet will not miss.

Rotund investigator Nero Wolfe has made more than his fair share of enemies over the years, and it seems one of them has decided to strike, targeting Wolfe’s indefatigable assistant. Some might run for cover, but Archie Goodwin is not the type. With the help of Wolfe’s brainpower, Goodwin will find the man who wants him dead—unless the killer gets to Goodwin first.

Nero Award–winning author Robert Goldsborough continues the brilliant work of Rex Stout in this classic mystery series. According to Publishers Weekly, “Goldsborough cleverly captures the tone and language of the originals. Rex Stout fans can only hope he has no plans to wind up the series soon.”

Storyline works but again narrator is not Archie nor does a good job with the other characters voices. Does a terrible Nero Wolfe voice. Being a Nero Wolfe fan I have become used to Rex Stout narrator’s voice for Archie