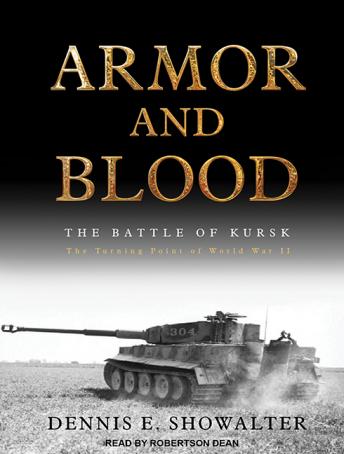 Armor and Blood: The Battle of Kursk: The Turning Point of World War II

While the Battle of Kursk has long captivated World War II aficionados, it has been unjustly overlooked by historians. Drawing on the masses of new information made available by the opening of the Russian military archives, Dennis E. Showalter at last corrects that error. This battle was the critical turning point on World War II's Eastern Front. In the aftermath of the Red Army's brutal repulse of the Germans at Stalingrad, the stakes could not have been higher. More than three million men and eight thousand tanks met in the heart of the Soviet Union, some four hundred miles south of Moscow, in an encounter that both sides knew would reshape the war. The adversaries were at the peak of their respective powers. On both sides, the generals and the dictators they served were in agreement on where, why, and how to fight. The result was a furious death grapple between two of history's most formidable fighting forces-a battle that might possibly have been the greatest of all time.

In Armor and Blood, Showalter re-creates every aspect of this dramatic struggle. He offers expert perspective on strategy and tactics at the highest levels, from the halls of power in Moscow and Berlin to the battlefield command posts on both sides. But it is the author's exploration of the human dimension of armored combat that truly distinguishes this book. In the classic tradition of John Keegan's The Face of Battle, Showalter's narrative crackles with insight into the unique dynamics of tank warfare-its effect on men's minds as well as their bodies. Scrupulously researched, exhaustively documented, and vividly illustrated, this book is a chilling testament to man's ability to build and to destroy.

When the dust settled, the field at Kursk was nothing more than a wasteland of steel carcasses, dead soldiers, and smoking debris. The Soviet victory ended German hopes of restoring their position on the Eastern Front, and put the Red Army on the road to Berlin. Armor and Blood presents listeners with what will likely be the authoritative study of Kursk for decades to come.

A few ideas worthy of taking notes on.

Armor and Blood is more than likely an excellent book for the Military or Tank Battle Historian, but without Maps and accompanying visual clues, it is difficult for the average person to follow with any understanding. Terms are not explained, and the author's incessant use of "salient" in various ways was very annoying. The Narrator's pronunciation of both German and Russian words was excellent though I found his style to be too monotone, but given the material, it would be hard for it to be otherwise.

A very comprehensive detailed history of the Battle of Kursk. Great for serious history buffs. I prefer character driven stories. So for me it was more like 3 stars. Actually I agree with William’s comment.

This book had too much detail that made it very hard for me to follow the overall time line. I found the narrator's voice to be monotonic and boring. I would not want to listen to another book read by Mr. Dean. I agree with Greg H's review.

Great straight forward book on the Battle of Kursk.

Best book on both the battle of Kursk and the strategic, operational, and tactical decisions, actions, and outcomes I have”read” and I have recommended it to classmates, friends, and military (active and retired) people I know. My only regret is that it was hard to follow without the appropriate maps in front of me. I did have a few I could access, but they, like previous analyses, were inadequate. Many new facts uncovered of which I was unaware even though having studied this battle at West Point and a lifetime of reading about WWII. The author captures true history by presenting both sides plans, decisions, orders, actions and the aftermath. He also provides analyses of the supporting arms (maintenance, logistics, and communications. I have friends who listened to Rudel’s account of the air battles from his Stuka and escape from the Russians after being wounded and shot down, but I thought it too one sided at the time, but after listening to this book and the piece about German tactical air defeating the better part of a Russian Corps all by itself was that Rudel did not exaggerate. This is a great contribution to our understanding of this turning point in WWII. It explained a lot of missing pieces.

Great read the accounts of the Kursk Battle.

Terrible. No real story just narrative of numbered groups of troops. No heart no soul.

Great book that intertwines strategic, operation, and tactical levels of war. The book is fair and extremely interesting.