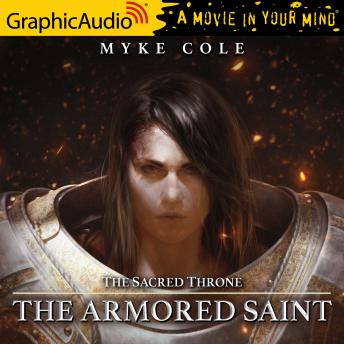 Myke Cole, star of CBS's Hunted and author of the Shadow Ops series, debuts the Sacred Throne epic fantasy trilogy with The Armored Saint, a story of religious tyrants, arcane war-machines, and underground resistance that will enthrall epic fantasy readers of all ages.

In a world where any act of magic could open a portal to hell, the Order insures that no wizard will live to summon devils, and will kill as many innocent people as they must to prevent that greater horror. After witnessing a horrendous slaughter, the village girl Heloise opposes the Order, and risks bringing their wrath down on herself, her family, and her village.

I was skeptical at first with this book, but the full audiobook I was greatly suprised. The voice acting and narration blew my mind, it honestly felt like I was there in the story.