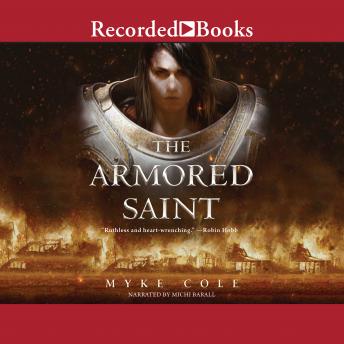 The first book in Myke Cole's The Sacred Throne Trilogy, blending epic fantasy with powered armor for fans of the Stormlight Archive Myke Cole, author of the beloved military fantasy Shadow Ops series, debuts a new epic fantasy trilogy with The Armored Saint, a tale of religious tyrants, arcane war-machines, and underground resistance that will enthrall epic fantasy readers of all ages. After witnessing a horrendous slaughter, young Heloise opposes the Order, and risks bringing their wrath down on herself, her family, and her village. She must confront the true risk that wizards pose to the world, and weigh the safety of her people against justice.

Awful. Plot is juvenile with more emphasis on the emotion feelings of a young confused girl than action or charter development.

This was one of those 2 for sales. Story was a bit confusing at first. Emperor, and other terminology had me wondering in what age and race these characters were. Quotes from emperor edicts were use quite often. So I had to use my imagination and think of them as Japanese or Chinese but no accent. Then Palatin was mentioned looked it up Roman history so that can explain why no accent. Book was proceeding nicely, characters started to come alive and story was building then the last 2 hours all went sideways. Couldn’t believe what I was hearing. Too bad I bought the second in this series. Guess will listen but anything like this one will not like it. Narrator was good. Her voice changes for all characters. Like I stated earlier I pictured this as oriental but the word PALATIN is Roman in nature. So that tilted my thought process a little more. Not sure the Roman emperor ever sat down and wrote out edicts for his subjects to follow and memorize and pass down to the next generation. But my history on Rome is vague Not rating book very good. Just can’t that last 2 hours just ruined it.

This was my first listen to anything by this author and I wasn't sure what to expect, but I was quite presently surprised! Definitely worth it. I would highly recommend this book to anyone looking for something new.