The Art Of War - Audio Book 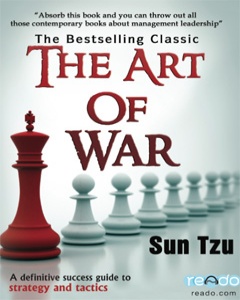 The Art of War is one of the oldest and most Successful books on military strategy.It has had an immence influence on eastern military thinking, business tactics,and beyond.Sun Tzu suggested the importance of positioning in strategy and that position is affected both by objective conditions in the physical environment and the subjective opinions of competitive actors in that particular environment. He thought that strategy was not just planning in the sense of working through an established list, but rather that it requires quick and appropriate responses to changing conditions.He Strongly believed that planning works in a controlled environment,but in a changing environment competing plans collide, creating unexpected situations. Widely regarded as one of the most important books ever to have emanated from the Eastern civilization,The Art of War is a must read for any business enthusiast or strategist. "If you know the enemy and know yourself,you need not fear the result of a hundred battles. If you know yourself but not the enemy, for every victory gained you will also suffer a defeat. If you know neither the enemy nor yourself, you will succumb in every battle." - Sun Tzu. "To fight and conquer in all your battles is not supreme excellence; supreme excellence consists in breaking the enemy's resistance without fighting ." Sun Tzu.

This title is due for release on September 4, 2011
We'll send you an email as soon as it is available!