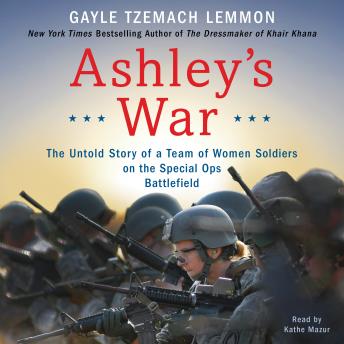 Ashley's War: The Untold Story of a Team of Women Soldiers on the Special Ops Battlefield

In 2010, the Army created Cultural Support Teams, a secret pilot program to insert women alongside Special Operations soldiers battling in Afghanistan. The Army reasoned that women could play a unique role on Special Ops teams: accompanying their male colleagues on raids and, while those soldiers were searching for insurgents, questioning the mothers, sisters, daughters and wives living at the compound. Their presence had a calming effect on enemy households, but more importantly, the CSTs were able to search adult women for weapons and gather crucial intelligence. They could build relationships—woman to woman—in ways that male soldiers in an Islamic country never could.

In Ashley's War, Gayle Tzemach Lemmon uses on-the-ground reporting and a finely tuned understanding of the complexities of war to tell the story of CST-2, a unit of women hand-picked from the Army to serve in this highly specialized and challenging role. The pioneers of CST-2 proved for the first time, at least to some grizzled Special Operations soldiers, that women might be physically and mentally tough enough to become one of them.

The price of this professional acceptance came in personal loss and social isolation: the only people who really understand the women of CST-2 are each other. At the center of this story is a friendship cemented by "Glee," video games, and the shared perils and seductive powers of up-close combat. At the heart of the team is the tale of a beloved and effective soldier, Ashley White.

Much as she did in her bestselling The Dressmaker of Khair Khana, Lemmon transports readers to a world they previously had no idea existed: a community of women called to fulfill the military's mission to "win hearts and minds" and bound together by danger, valor, and determination. Ashley's War is a gripping combat narrative and a moving story of friendship—a book that will change the way readers think about war and the meaning of service.

This isn't exactly my genre but I listened in honor of Memorial Day. I am impressed by the selflessness of the women described but can't help but wonder if we don't seduce idealistic young people, now including women,into fighting a war thay is very profitable for our Military Industrial Complex, but doesn't actually achieve the objectives for which we believe we are fighting. Rest in peace Ashley...

Ashley’s war is a fabulous insight and certainly educated us about the integrity of the women in the military. The narration was very engaging.

Ashley White is an inspiration who believed in something greater than herself or one’s self. She deserves our respect and gratitude. This book points out the futility of America’s forgotten war. It has been going on 17 years in Afghanistan with no end in sight. There is no plan or a hope of any kind of meaningful resolution. This war serves to breed hatred against our country and our people. It is a shame but I won’t be surprised if it is still going on in 20 or 25 years and we will have more grieving families, more PTSD veterans and continue to spend billions annually. Stop the madness !

This is just an excellent and well-written Novel. It is definitely worth a listen. It's the kinda book that changes your perspective and makes you think.