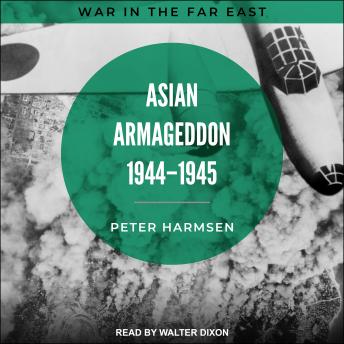 The last installment of the War in the Far East trilogy, Asian Armageddon 1944-1945, continues and completes the narrative of the first two volumes, describing how a US-led coalition of nations battled Japan into submission through a series of cataclysmic encounters. Leyte Gulf, the biggest naval battle ever, was testimony to the paramount importance of controlling the ocean, as was the fact that the US Navy carried out the only successful submarine campaign in history, reducing Japan's military and merchant navies to shadows of the former selves. Meanwhile, fighting continued in disparate geographic conditions on land, with the chaos of Imphal, the inferno of Manila, and the carnage of Iwo Jima forming some of the milestones on the bloody road to peace, sealed in Tokyo Bay in September 1945. It was a world where the stage was set for the Cold War and for international rivalries that last to this day, and a new constellation of powers emerged.

War in the Far East is a trilogy of books comprising a general history of World War II in the Asia Pacific. Unlike other histories on the conflict it goes into its deep origins, beginning long before Pearl Harbor, and encompasses a far wider group of actors to produce the most complete account yet written on the subject and the first truly international treatment of this epic conflict.