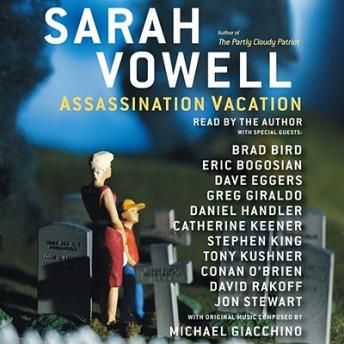 New York Times bestselling author of The Wordy Shipmates and contributor to NPR’s This American Life Sarah Vowell embarks on a road trip to sites of political violence, from Washington DC to Alaska, to better understand our nation’s ever-evolving political system and history.

Sarah Vowell exposes the glorious conundrums of American history and culture with wit, probity, and an irreverent sense of humor. With Assassination Vacation, she takes us on a road trip like no other—a journey to the pit stops of American political murder and through the myriad ways they have been used for fun and profit, for political and cultural advantage.

From Buffalo to Alaska, Washington to the Dry Tortugas, Vowell visits locations immortalized and influenced by the spilling of politically important blood, reporting as she goes with her trademark blend of wisecracking humor, remarkable honesty, and thought-provoking criticism. We learn about the jinx that was Robert Todd Lincoln (present at the assassinations of Presidents Lincoln, Garfield, and McKinley) and witness the politicking that went into the making of the Lincoln Memorial. The resulting narrative is much more than an entertaining and informative travelogue—it is the disturbing and fascinating story of how American death has been manipulated by popular culture, including literature, architecture, sculpture, and—the author’s favorite—historical tourism. Though the themes of loss and violence are explored and we make detours to see how the Republican Party became the Republican Party, there are all kinds of lighter diversions along the way into the lives of the three presidents and their assassins, including mummies, show tunes, mean-spirited totem poles, and a nineteenth-century biblical sex cult.

Love this book and author. Her stories are funny and educational. It makes me want to go on an assassination vacation too.

Returned--couldn't finish it--couldn't get past her voice. It may be a good book--I liked the subject but would rather hear a drill at the dentist office. Someone should have told her how bad her voice was before she made the reading.

Witty, very well researched, with some fine story telling. The only bad point is the reader sounds like the daughter of Gomez Adams. If you can get past this you will have a very fine listening experience.

I have been a presidential hobbyist for 40 years and I never had so much fun reading a history book. Sarah's wit comes though loud and clear, I never knew facts about dull Jimmy Garfield could make me laugh.

Sarah Vowell makes history fun. I knew virtually nothing about Garfield and McKinley much less their nut case assassins. She reads her own work and her unique voice brings her personality out and shows her passion for her topic. HOWEVER, she almost ruins the entire adventure by randomly inserting extreme hatred for George W. Bush at every oportunity and showing no respect for God or Christians in general. If she could have stuck with her subject matter this book would be a true gem.

What a delightful 'read'. Too much detail to do much else besides listen, but what a wonderful book. Author is ascerbic and definitely is definite about her politics. She also reads the book, so emphasis and style are in line with the book. I like it, and cannot wait for her other book to come out in Audio.

Although in the begining I was kind of loss as to what the book was about. It became quite clear that she has same love of history that I have. Enjoyed the off beat stories and the little known facts about the people that she worte about. Being a student of history myself I do not always agree with the parallels that she draws with current day events, and would love to have a discussion on those points. I never the less would very much like to take some of trips that she talked about and visit some of the out of the places that she visited. Going see these places where history happens always makes it come alive and real instead of just reading dates and names in a dry history book. She made these places and people come alive and fleshed them out. They are not just dead people and places in far off lands unaccessable.

The author's voice is unique... well we all have unique voices! Hers tends to grating to start as she reads her own work, however perseverance gives you a witty take on all she is discussing, filled with wonderful trivia, lots of context for the facts and some out loud laughing. I shall go in search of more to read or listen to by this author.

I cannot speak of the book itself because I could not listen to the reader. I'll give it another chance but in print form.

Her voice is annoying. The book is less historical than I wanted. I felt sorry for RT Lincoln. But yet I read this book to the bitter end. I don't know why, but I couldn't send it back unread. I'll just give it three stars and move on!

Good listen, opening dialog is very funny. The narrator has a valley girl type voice which can be irritating at times but one gets used to it. All of the stories characters have guest voices (Connon O'Brien, Stephen King does Lincon, etc) and this makes it much more interesting. The writer definately did her research to make this possible (she relates toward the end that she has a masters degree in art history). Just finding some of the actual places proved a challenge. For renters like me you have to rent this title in two parts (comes as 6 CD's). Would recommend the first CD to anyone as the part about the authors dialogue in the bed and breakfast is universely funny. The rest is mostly interesting to those who really are into history (and I count myself in this class).

I absolutely loved this book. I am just finishing the final disc, and I have to say that this book is enormously educational and also whimsical and touching. Anyone who wants to learn more about American history and also America today should listen to this book.

I really like Sarah Vowell on NPR and the first CD was quite funny. But after that, unless you are really interested in presidential assassins and murders, it gets to be a little much. She is very witty but I found myself drifting off and only being brought back when she would talk about something personal rather than historical. I was unfortunately disappointed and returned it after disc 2.

Oh my! Coming across this book was like finding a diamond in the rough. It was fabulous! I am so taken with it that I am going to buy a print copy as well as seek out anything else written by this author. A splendid combination of historical facts, trivia, and tongue in cheek references to the current political situation. Conservatives beware! You will certainly not appreciate Sarah's point of view. Unlike some of the other reviewers, I think the author's voice is an important element to the ironical tone of the book. Excellent work, Sarah! I hope you will give us many more similiar literary treats!

Yes, but entertaining. Might be too focused for those not as obsessed with American history as Vowell, but you will learn a great deal.

I loved this book! It takes some getting used to the author's voice (I had heard it before,she was a character voice on 'The Incredibles' and that is how I learned about this book, through the DVD extras). I love her morbid take on history. The antedotes about historical figures and places were so interesting. I'm excited to see more from her. I highly recommend this book if you are interested in history .

This book is both charming and funny. It's history and gossip and travelogue all packed together. Vowell reads her own work and she reads it well, though her voice is unique, and possibly annoying to some.

Perfect example of why an author shouldn't read their work. The authors voice just doesn't work. Not sure who told her she should read her book, but I find her voice not the least bit enjoyable. Content of book very good, but wish she would hold off on the political statement, save it for her next book.

Oh, if only I could have had a history teacher in school like Sarah Vowell. I may have actually payed attention! Sarah is a self-described history buff and her enthusiasm for all things historical is contagious. This book is not only very funny but also a little educational as well. I listened to it while in Washington D.C. to get myself psyched for the endless historic tours--and it worked!

This title is due for release on April 4, 2005
We'll send you an email as soon as it is available!