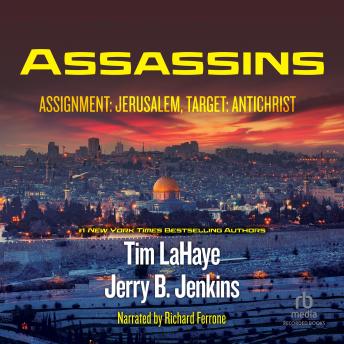 The Left Behind series is the fastest-selling Christian series ever. Each volume immediately hits best-seller lists and has thrilled millions of readers worldwide. As the sixth volume, Assassins, follows the fulfillment of Biblical prophecy, terrifying portents of judgement appear. It is now thirty-eight months into the Tribulation. Giant horsemen ride the earth, scorching thousands with their fiery wrath. The believers in Christ, finding sanctuary in safe houses, continue to receive spiritual strength from their leader. But one of the faithful, desperate to hasten events, is secretly planning to assassinate the Antichrist, Nicolae Carpathia. Educator and lecturer Tim LaHaye has made a lifelong study of prophecy. Jerry B. Jenkins has written four best-selling books. Their collaboration fills the Left Behind series with unforgettable apocalyptic visions and dramatic conflicts. Enhanced by Richard Ferrone's muscular narration, Assassins pulls the listener into the midst of great clashes between good and evil.

This book is awesome! The author takes the book of Revelation and opens it up in the context of our time. It makes you feel like you can relate to the characters and you find yourself telling God, “I’m glad I won’t be left behind.” I would want to be on this planet or anywhere other than heaven when the tribulation comes.

This is a great series to listen to over and over!!

Great book, just as they all are and I believe that Richard Ferrone is, by far the best narrator of this series that Ive heard.

Awesome book I felt that I was apart of what was going on. The narrator Richard Ferrone was superb thank you for that experiencelooking forward to reading the rest of the books.