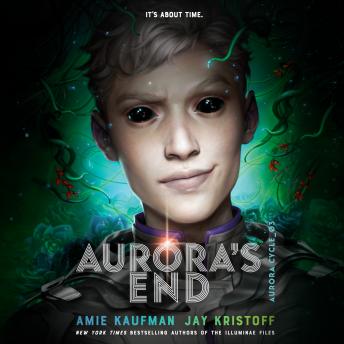 #3 of The Aurora Cycle

NEW YORK TIMES BESTSELLING SERIES • The squad you love is out of time. Prepare for the thrilling finale in the epic, best-selling Aurora Cycle series about a band of unlikely heroes who just might be the galaxy's last hope for survival.

Is this the end?

What happens when you ask a bunch of losers, discipline cases, and misfits to save the galaxy from an ancient evil? The ancient evil wins, of course.

When we last saw Squad 312, they working together seamlessly (aka, freaking out) as an intergalactic battle raged and an ancient superweapon threatened to obliterate Earth. Everything went horribly wrong, naturally.

But as it turns out, not all endings are endings, and the team has one last chance to rewrite theirs. Maybe two. It's complicated.

Cue Tyler, Kal, and Auri: uniting with two of the galaxy’s most hated villains? Um, okay. That, too.

Actually saving the galaxy, though? Now that will take a miracle.

I was expecting a more exciting ending. It was a little disappointing after investing so much into the first 2 books. Would be nice to have more action at the end. however, I would like a follow up short short about their future lives, kids, etc.

This was such a satisfying end to the trilogy.