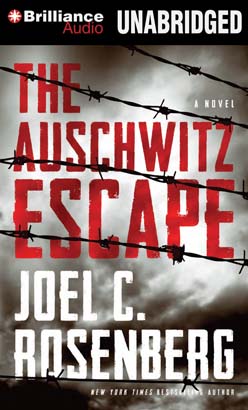 A terrible darkness has fallen upon Jacob Weisz’s beloved Germany. The Nazi regime, under the leadership of Adolf Hitler, has surged to power and now hold Germany by the throat. All non-Aryans—especially Jews like Jacob and his family—are treated like dogs.When tragedy strikes during one terrible night of violence, Jacob flees and joins rebel forces working to undermine the regime. But after a raid goes horribly wrong, Jacob finds himself in a living nightmare—trapped in a crowded, stinking car on the train to the Auschwitz death camp.As World War II rages and Hitler begins implementing his “final solution” to systematically and ruthlessly exterminate the Jewish people, Jacob must rely on his wits and a God he’s not sure he believes in to somehow escape from Auschwitz and alert the world to the Nazi’s atrocities before Fascism overtakes all of Europe. The fate of millions hangs in the balance.

Best I've ever heard hands down.

I think this is a must read for everyone. Not only does Mr. Rosenberg bring the characters to life, he writes in a way that makes you feel like you are living within the story. This is such a tragic event in our world’s history, and one I feel has been lost over the generations. As a Christian I learn more about my faith and about myself reading his novels. This particular one really hits you hard emotionally and spiritually, yet will challenge your own views in faith, whether you are a believer or not, whether you are Jewish or a Christian. Just wait for the epilogue.

Great storyline... Rosenberg knows how to tell a good story... Yet in some areas, his rendering of the Auschwitz Camp experience seemed light and glossed over in comparison to other true story accounts...Exp. In the Spring, there was 0 birds neither were there... green grass... prisoners eat the grass, due to their starving conditions... Birds were seldom if at all, there... and trees were no where near the camp's setting... However, besides. this evidence, it holds a powerful message of GOD... And stirs up faith in its readers! For this...its worth the listen to!

Unforgettable! The narrator was incredible, pulling you into every scene. Will listen to it again!! Lots of tears for all the senseless death and torture.

Good read. Very insightful. I started it. Due to the negative reviews i out it down. I am so glad i picked it back up. Very much worth the tome. Especially if you are interested in the prison camps during WW2

This story although it is listed as a fiction book, is actually based on true history. It should be a must read for all mature school age young adults. Public schools would not use such a true type of story because history has been revised in too many places. But parents should make this a must for their mature children because it is true history.

This title is due for release on March 18, 2014
We'll send you an email as soon as it is available!