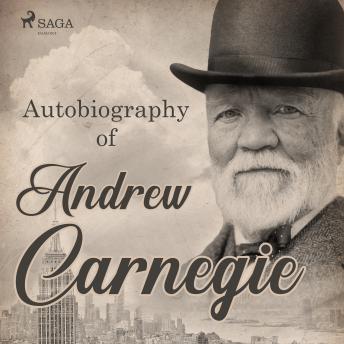 This posthumously published autobiography of Andrew Carnegie is a very well written and interesting accounts of the life of one of the wealthiest self-made men in American history. The industrialist and philanthropist lived his life according the following dictum: spend the first third of your life getting all the education you can; spend the next third making all the money you can; and spend the last third giving it all away for worthwhile causes.

-
Andrew Carnegie (1835-1919) was a Scottish-American philanthropist and industrialist, who made his fortune expanding the American steel industry. Born in Fife (Scotland), his family was poor and they emigrated to Pennsylvania in 1948, in hope of finding better fortune there. He started working for the railroads at an early age, earning his way up, before leaving that industry to focus on the steel industry after the Civil War. Carnegie was also an author and while he is mostly remembered for his posthumously published autobiography, he contributed to many periodicals, discussing labour issues, and published works such 'The Gospel of Wealth' (1889) and 'The Empire of Business' (1902).

I found Carnegie's life, stories, and wisdom to be fascinating. We are fortunate that this great man immigrated to the U.S. and that the world continues to benefit from his generosity.

This title is due for release on September 14, 2020
We'll send you an email as soon as it is available!