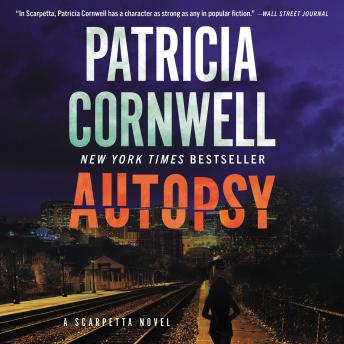 Forensic pathologist Dr. Kay Scarpetta has come almost full circle, returning to Virginia, the state where she launched her storied career, as the chief medical examiner. Finding herself the new girl in town once again after being away for many years, she’s inherited both an overbearing secretary and a legacy of neglect and potential corruption.

She and her husband, Benton Wesley, now a forensic psychologist with the U.S. Secret Service, have relocated to Old Town Alexandria, where she’s headquartered five miles from the Pentagon in a post-pandemic world that’s been torn apart by civil and political unrest. After just weeks on the job, she’s called to a scene by railroad tracks—a woman’s body has been shockingly displayed, her throat cut down to the spine—and as Scarpetta begins to follow the trail, it leads unnervingly close to her own historic neighborhood.

At the same time, a catastrophe occurs in a top secret labo­ratory in outer space, endangering at least two scientists aboard. Appointed to the highly classified Doomsday Commission that specializes in sensitive national security cases, Scarpetta is summoned to the White House and tasked with finding out exactly what happened. But even as she remotely works the first potential crime scene in space, an apparent serial killer strikes again very close to home.

This latest novel in the groundbreaking Kay Scarpetta series captivates readers with the shocking twists, high-wire tension, and forensic detail that Patricia Cornwell is famous for, proving once again why she’s the world’s #1 bestselling crime writer.

After reading Chaos and being disappointed I decided to give Autopsy a chance. This was even worse. As usual had to hear all about the grandiose of their house, etc. The end was sudden and unexpected. Done!

Very detailed throughout the the book, then bam its done. Terrible way to finish a book. Don't bother

I have read all of her novels, but it seems to have run its course. The story line was too incredible to believe (half of it...without spoiling the book). I definitely did not enjoy the way it was read, but maybe because I have read her books and had what I thought the main character's voice might sound like. it was robotic to me, in the way it was read. Too bad as she had been one of my favorite authors.

Worst read book I have heard so far. Do not like the book either and maybe that is because of the reader. And I usually love Patricia Cornwell, have read almost all of her books.

A Scarpetta fan for years, I found this one quite difficult to relate to, and then boom, the killer was found. Odd.

I couldn’t get past chapter 2 due to the narrator. The cadence was way too slow and I got incredibly frustrated just listening to her drag out. each. word. Love Patricia Cornwell’s books so I’ll probably pick up the printed book instead.

Remember now why I quit reading her novels years ago. Slow pace, too much angst and drama. No real story here just a vehicle to get her back in Virginia.

Listened to many throughout years. Too many political views in this book. Forced my self to finish

I just couldn't get into this the reading was mind numbing.