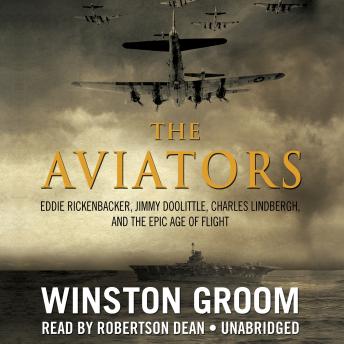 Gifted storyteller Winston Groom, the bestselling author of Forrest Gump, has written the fascinating story of three extraordinary heroes who defined aviation during the great age of flight: Charles Lindbergh, Eddie Rickenbacker, and Jimmy Doolittle. These cleverly interwoven tales of their heart-stopping adventures take us from the feats of World War I through the heroism of World War II and beyond, including daring military raids and survival at sea, and will appeal to fans of Unbroken, The Greatest Generation, and Flyboys.

With the world in peril during World War II, each man set aside great success and comfort to return to the skies for his most daring mission yet. Doolittle, a brilliant aviation innovator, would lead the Tokyo Raid to retaliate for Pearl Harbor; Lindbergh, hero of the first solo flight across the Atlantic, would fly combat missions in the South Pacific; and Rickenbacker, World War I flying ace, would bravely hold his crew together while facing near-starvation and circling sharks after his plane went down in a remote part of the Pacific. Groom's rich narrative tells the intertwined stories—from broken homes to Medals of Honor (all three would receive one), barnstorming to the greatest raid of World War II, front-page triumph to anguished tragedy, and near-death to ultimate survival—of these three men who took to the sky, time and again, to become exemplars of the spirit of the 'greatest generation.'

Great book. I have heard and read popular stories concerning these men but diving deep into their stories simultaneously was a truly remarkable journey through early aviation history. Not a dull moment.

What a remarkable account of aviation history! I felt like I was on the journey with everyone. All details included were necessary without much waffling.

Back-and-forth between characters and time frames is a little confusing, but I'm not sure how it could have been written better. All 3 men were so pivotal to how we understand life now. Research and narration were excellent! I'm buying a paper copy for my husband, who reads old school. This book's a keeper.

I agree! Not a dull moment!

Great book about three of the great pioneers of flight. Detailed stories about the trials and tribulations that came with the completion of their incredible aeronautical feats, and the advances that were made due to their continuous experimentation with flight. This book had me laughing, tearing up, but most importantly, it made me proud to come from the nation that these men helped build!!! Great American story!!!!!

Very insightful stories of the impact made to the advancement of aviation by Lindbergh, Dolittle and Rickenbacher

I just loved this book! The more I understand what a tremendous generation of men and bravery delivered us from the Second World War! I also love the narrative of Robertson Dean!

Wonderfully written and masterfully read!! The research into this story is amazing!! Thanks for sharing this history and Knowledge with me!! LGJ

Outstanding all the way around. Highly recommend.

This title is due for release on November 5, 2013
We'll send you an email as soon as it is available!