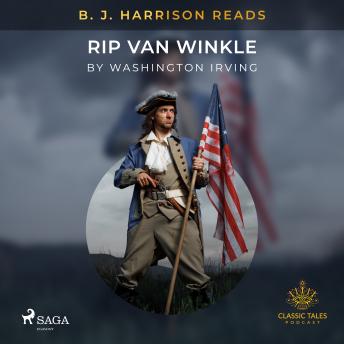 Narrated By: B. J. Harrison

'Rip Van Winkle' is a short story by Washington Irving about a man who drinks some liquor then falls asleep for 20 years amidst the hills. Having missed the American Revolution, Rip Van Winke returns home but finds it completely changed. What he notices is really important, as they possess social and political messages that Irving wanted to stress. The independence from the British rule, the first steps into modernity, and the passing of time, all for better or worse, are among these messages that turn 'Rip Van Winkle' in one of the finest short stories in American literature. Recommended to fans of the genre and American literature in general.
B. J. Harrison started his Classic Tales Podcast back in 2007, wanting to breathe new life into classic stories. He masterfully plays with a wide array of voices and accents and has since then produced over 500 audiobooks. Now in collaboration with SAGA Egmont, his engaging narration of these famous classics is available to readers everywhere.
Versatile as the subject matters of his literary oeuvre, the name of Washington Irving (1783-1859) still echoes in the corridors of the American literary canon. Having earned special status as a man of letters in America and Europe alike, Irving’s fame stems primarily from his short stories 'Rip Van Winkle' and 'The Legend of Sleepy Hollow'. An avid biographer and historian, his influence can be felt within a vast group of American and British authors such as Nathaniel Hawthorne, E. A. Poe, Charles Dickens, and Sir Walter Scott.

This title is due for release on February 15, 2021
We'll send you an email as soon as it is available!