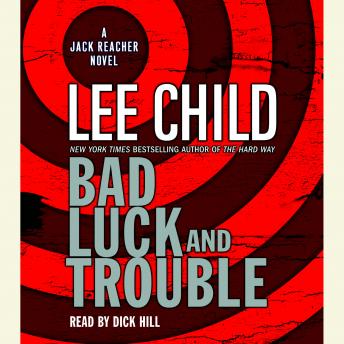 From a helicopter high above the empty California desert, a man is sent free-falling into the night…. In Chicago, a woman learns that an elite team of ex–army investigators is being hunted down one by one.... And on the streets of Portland, Jack Reacher—soldier, cop, hero—is pulled out of his wandering life by a code that few other people could understand. From the first shocking scenes in Lee Child’s explosive new novel, Jack Reacher is plunged like a knife into the heart of a conspiracy that is killing old friends…and is on its way to something even worse.

A decade postmilitary, Reacher has an ATM card and the clothes on his back—no phone, no ties, and no address. But now a woman from his old unit has done the impossible. From Chicago, Frances Neagley finds Reacher, using a signal only the eight members of their elite team of army investigators would know. She tells him a terrifying story—about the brutal death of a man they both served with. Soon Reacher is reuniting with the survivors of his old team, scrambling to raise the living, bury the dead, and connect the dots in a mystery that is growing darker by the day. The deeper they dig, the more they don’t know: about two other comrades who have suddenly gone missing—and a trail that leads into the neon of Vegas and the darkness of international terrorism.

For now, Reacher can only react. To every sound. Every suspicion. Every scent and every moment. Then Reacher will trust the people he once trusted with his life—and take this thing all the way to the end. Because in a world of bad luck and trouble, when someone targets Jack Reacher and his team, they’d better be ready for what comes right back at them…

I love the Jack Reacher Novels. I especially love Dick Hill as the reader. I am not a fan when it is another reader. I find it hard to listen when it is not Dick Hill reading.

One of the best teacher books last 10 chapters especially.

The pitch it narrator uses changes a lot. Hard to listen to through the trucks speakers. Goes back and forth between hurts the ears load to can barely hear multiple times each minute

Another Jack Reacher thriller! Lee Smith has created a great “Charter” with Reacher. It is not great literature; but it is a great listen when walking during COVID-19! Narrator is again perfect!

One of the more engaging Reacher novels. I really appreciated the incorporating of characters from past novels, tying the books together, although not necessary to read to follow this one. I also loved the richness of each of the characters and how they add to the story. I haven’t listened to a ton of audiobooks, but the voices of the other characters done by Dick Hill don’t often seem to line up with their personalities. Especially the women. Just my two cents. Not that I could do it any better. Overall, great story.

I gave this four stars because it brings back his old MP crew. As a whole it was a good book, only a few times do you feel the writer was over describing the scene. In the end I thought the “bad guys” were not the brightest and was disappointed that they were able to do what they did against some of Reacher’s elite team. I read/listen in chronological order and the series has been getting better since “The Punisher”. His active duty days are the best. After I finished this book I wanted to get the next in the series, which is how I rate how good the story was.

Great book, great story. The pace of the book was perfect and Dick Hill does such a great job narrating, much better than others.

Good book. I love the Jack Reacher novels. This one is as good as the rest. I recommend this book.

great story, love that they brought the whole team into the story.I hope there is another story where they come together.

Absolutely loved it. Love Jack Reacher and how he works things out. Can't get enough.

Unlike almost every other reviewer I thought the narration was GREAT. The guy BECAME Jack Reacher for me. Wonderfully entertaining story, great characters, good plot twists and a good guy with a REAL mean streak. My first, but certainly not last Lee Childs. Good read.

This was my first Lee Child novel. It was average. At times, the book didn't have my full attention.

I really liked this book. It was my first from this author and I have to say, I'm glad I took the chance. I was totally drawn into the story right from the start. It was hard not to want to see what came next which seemed to happen over and over again. Never got real slow or to detailed - yet built on the, very interesting characters, in a methodical manner and just the right amount of detail. Real good listen if you are a fan of the genre and even if you are not. Well written all the way around. My only criticism was the quality of the sound. At first it seemed like it was the narrator, but as time went on it became more obvious that it was the quality of the recording. The narrator did taper of his volume a bit, bit and put emphasis in areas that did not always seem appropriate, but I think it was the quality that bothered me. I kind of liked the narrators style - it grew on me. All in all.....good book and I highly recommend.

This was my first Lee Child book. Not bad novel to listen to.

This is a great story. I am so spoiled by Will Patton and his narration, that this reader was excruciating! My goodness, where did they find this guy. Overall, however, its a good listen. Fast paced, with all the fun stuff one looks for! If you can get past the reader is a good listen.

I liked it, a couple of nice twists, Reacher is a very interesting and likeable guy

I enjoyed the story line, but was never thrilled with the reader of the book.

Everyone should be so lucky as to have a friend like Jack Reacher. Maybe without the gun though! A good story about friendship and commitment. Oh, and some major revenge. An enjoyable listen.

Fans of Lee Child will enjoy this quick and fun listen. Jack Reacher and associates on an improbable, yet page turning, adventure makes for an entertaining novel.

Lee Child is one of the those authors that publish a book, and I buy it. This book might be a good book, but I could NOT get into the narrator. I will probably read it myself. It might be me, this was my first book on CD. But the narrator could not keep my interest. I found myself daydreaming in traffic. So I will try a few more books, and hope it was just the narrator.

Overall, classic Lee Child. I really enjoyed this one. However, I personally do not like abridged versions. I always feel like I am missing out - and did so once again on this book. Other than that issue, a great time listening to this one.

Enjoyable listen. Tough guy persona of main character pushed on you a little bit, but supporting cast of characters was strong. Build up to climax was interesting and fast paced, but climax itself, though strong in its own right, seemed a bit unsatisfying. Recommended.

This title is due for release on May 15, 2007
We'll send you an email as soon as it is available!