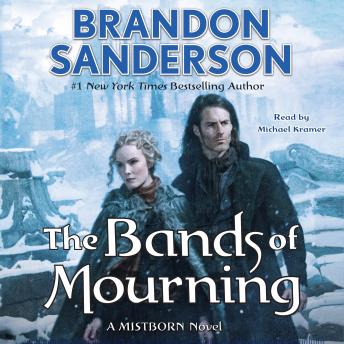 The Bands of Mourning: A Mistborn Novel

#6 of The Mistborn Saga

Three hundred years after the events of the Mistborn trilogy, Scadrial is now on the verge of modernity, with railroads to supplement the canals, electric lighting in the streets and the homes of the wealthy, and the first steel-framed skyscrapers racing for the clouds.

The Bands of Mourning are the mythical metal minds owned by the Lord Ruler, said to grant anyone who wears them the powers that the Lord Ruler had at his command. Hardly anyone thinks they really exist. A kandra researcher has returned to Elendel with images that seem to depict the Bands, as well as writings in a language that no one can read. Waxillium Ladrian is recruited to travel south to the city of New Seran to investigate. Along the way he discovers hints that point to the true goals of his uncle Edwarn and the shadowy organization known as The Set.

This era is a lot of fun but not as interesting as the first era. But I do enjoy the characters a lot and the direction he is taking this world.

Like these characters but lacks the elegance and depth of Stormlight Chronicles.

If your a Brandon Sanderson this trilogy will surprise you. The sense of humor brought to bear was a delightfull surprise. i was constantly laughing outloud by myself.. Not to mention its a pretty good story aside from the witty banter between the characters and the comedy. The Narrator was very good, and really added something to the story. Definately Recomend

Michael Kramer is the best narrator ever. I'm so grateful that he narrates most books I listen to. Waiting for the final book in the Mistborn series! They are great stories.

Completely loved it!! Sanderson keeps the twists and turns coming as you listen to this book, as he always does. Probably my favorite book of the 3 so far that have followed the mistborn trilogy.

totally awesome... as always with Sanderson! These new mistborn novels are even better than the original series. and if you haven't already read mistborn you better get on that. it's awesome