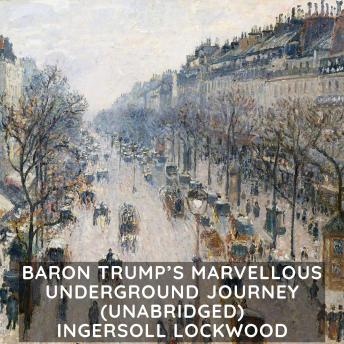 Baron Trump's Marvellous Underground Journey is a parabolic fantasy novel by Ingersoll Lockwood 1900; or, The Last President). This strange fin de siècle obscurity from 1893 has received widespread media attention recently due to the similarities between its hero and US President Donald Trump.

The Trump of Lockwood's novel is an aristocratic youth bored with his life of luxury in his New York castle. Searching for adventure, he travels to Russia where he discovers an underground world beneath his feet. Trump journeys ever downward and finds himself lost in peculiar settings surrounded by the strange inhabitants of this foreign realm, which consists of The Land of Transparent Folk, The Land of the Sodopsies or Ant People, The Frozen Land of King Gilead and The Land of the Rattlebrains or Happy Forgetters. The story follows little Baron's efforts to navigate the scary Russian underworld and find his way back to America.

This title is due for release on July 10, 2020
We'll send you an email as soon as it is available!