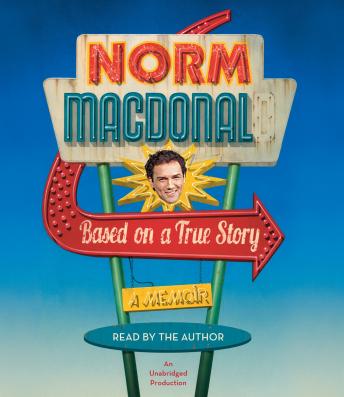 Based on a True Story: A Memoir

When Norm Macdonald, one of the greatest stand-up comics of all time, was approached to write a celebrity memoir, he flatly refused, calling the genre “one step below instruction manuals.” Norm then promptly took a two-year hiatus from stand-up comedy to live on a farm in northern Canada. When he emerged he had under his arm a manuscript, a genre-smashing book about comedy, tragedy, love, loss, war, and redemption. When asked if this was the celebrity memoir, Norm replied, “Call it anything you damn like.”

Awesome book. Hilarious with a strong visuals. I think Norm's narration made it even better. I should warn that he ending is brilliantly infuriating.

This is the best and funniest celebrity memoir, I have ever read. So great I had to get the author read audio version best decision I have made in a while.

Norm has always been one for very long jokes and I must say this almost 7 and a half hour long audiobook is his longest and cleverest joke yet.

This may be the best book ever written. RIP Norm.

Yeah it's alright I guess

If you don’t like Norm you probably don’t own a dog house.

What could be more amazing than Norm reading you his novel? nothing I tell you.

Not only a great man but also a great story!

Amazing! If you like Norm, you’ll love this book.

Great book! Not just great comedy from Norm but also a great piece of literature!