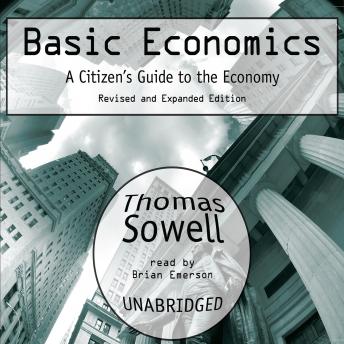 Basic Economics: A Citizen’s Guide to the Economy: Revised and Expanded Edition

Thomas Sowell has a different idea about how economics should be taught. With this groundbreaking introduction to economics, Sowell has thrown out the graphs, statistics, and jargon. Learning economics, he believes, should be relaxing—and even enjoyable.

Sowell reveals the general principles behind any kind of economy—capitalist, socialist, feudal, and so on. In understandable language, he shows how to critique economic policies in terms of the incentives they create rather than the goals they proclaim. With clear explanations of the entire field, from rent control and the rise and fall of businesses to the international balance of payments, this is the first book for anyone who wishes to understand how the economy functions.

In this edition, Basic Economics has been revised and expanded to address the new concerns of the twenty-first century. It's focus has become more international, including the range of economic problems faced by foreign countries around the world. Each chapter reflects the experiences of many different peoples and cultures. In his straightforward style, Sowell demonstrates that the basic principles of economics are not confined by national borders.

This title is due for release on October 13, 2009
We'll send you an email as soon as it is available!