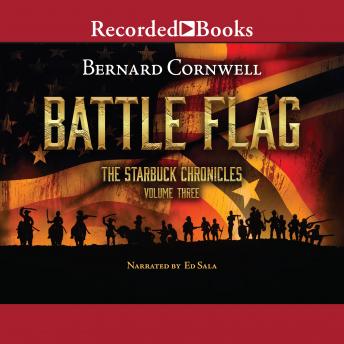 Bernard Cornwell's superb Civil War dramas have been compared with Michael Shaara's The Killer Angels. Basing Battle Flag on the Campaign of Second Manassas in August, 1862, Cornwell takes the listener from whispered negotiations to the roar of cannon fire. A Northerner fighting for the South, Nate Starbuck has distinguished himself as captain of his Confederate regiment. But his battles go beyond the rifle smoke. The enmity between Starbuck and his commander, the unscrupulous General Faulconer, is never far from the surface. And when Nate encounters his stern father, who is fervently supporting Northern troops, Nate must calculate his own price for victory. Their flags are powerful symbols of the loyalty and ideology at work as Confederate and Union regiments clash at Manassas. But history, as Cornwell shows, is also shaped by more personal motives. Ed Sala's performance captures all the drama of the Civil War-on the battlefields and in men's hearts.

This title is due for release on May 13, 2011
We'll send you an email as soon as it is available!