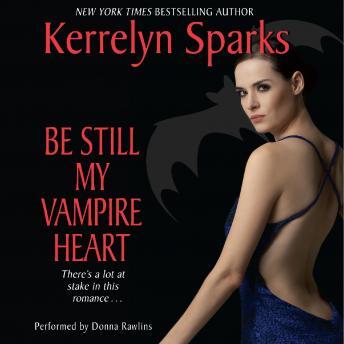 Be Still My Vampire Heart

If it was still beating. Angus MacKay has been undead for almost five hundred years and it's not often something, or someone, surprises him. Until Emma Wallace. The sight of this luscious agent from the CIA's elite Stake-Out team was enough to stop Angus in his tracks. But then he discovers that she's a vampire slayer, intent on killing the 'monsters' who killed her parents. And it's Angus's job to stop her.

The only good vampire is a dead vampire. It's been Emma's motto since she committed her life to the destruction of these things. Now Angus MacKay wants to convince her differently.

Sure, he's a sexy Highland warrior who seems to have stepped off the cover of a romance novel, complete with brogue, kilt, and sword, but he's also one of them. And it's her job to kill him.

The war is on, but will it end in the destruction of one or both of them . . . or in total surrender to a passion for the ages?

Very well read! Keeps the listener engaged. Love this book! Have started listening to the rest of the series!

I love this series and highly enjoy listening to it while driving. This story is a great read bit the narration was a disappointment. I can not honestly find a reason why the narrator would not have portrayed Emma as being from Great Britain. All the other characters have their accents but her. It is a bit disconcerting that Emma's past and previous jobs are discussed but still no accent. I have looked at the other books in the series and this is the only story that Donna Rawlins narrated. I do recall that there are other stories within this series where the same thing happens. Emma's accent disappears but all the Scott's have theirs.

Emma is very British in the previous book but the narrator doesn't represent her with an accent. Very disappointng.