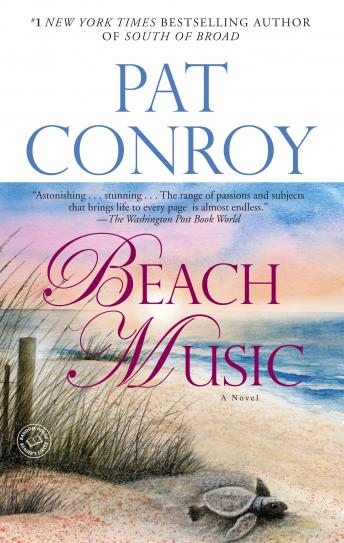 Pat Conroy is without doubt America's favorite storyteller, a writer who portrays the anguished truth of the human heart and the painful secrets of
families in richly lyrical prose and unforgettable narratives. Now, in Beach Music, he tells of the dark memories that haunt generations, in a story
that spans South Carolina and Rome and reaches back into the unutterable terrors of the Holocaust.

Beach Music is about Jack McCall, an American living in Rome with his young daughter, trying to find peace after the recent trauma of his wife's
suicide. But his solitude is disturbed by the appearance of his sister-in-law, who begs him to return home, and of two school friends asking for his help in
tracking down another classmate who went underground as a Vietnam protester and never resurfaced. These requests launch Jack on a journey that encompasses the past and the present in both Europe and the American South, and that leads him to shocking--and ultimately liberating--truths.

Told with deep feeling and trademark Conroy humor, Beach Music is powerful and compulsively readable. It is another masterpiece in the legendary
list of classics that his body of work has already become.

PAT CONROY is the author of five previous books: The Boo, The Water Is Wide, The Great Santini, The Lords of Discipline, and
The Prince of Tides, the last four of which were made into feature films.

All Conroy at his best!

An all time favorite. If someone asks me to recommend a book this is it. Love all the characters!!!!

Great book! WOW what an ending

Love Pat Conroy books and this one did not disappoint!

I loved the way the story wove it’s way through their lives young to older years and how they intertwined in each other. I loved this book and I loved the narrator! His voice kept me bound to South Carolina.....more so Charleston! Living here just makes Pat’s works even better! Being able to put yourself in the setting because you’ve been there as late as a minute ago is so much fun!

Pat Conroy style. write about what you know and have a great book. Liked this book a lot.