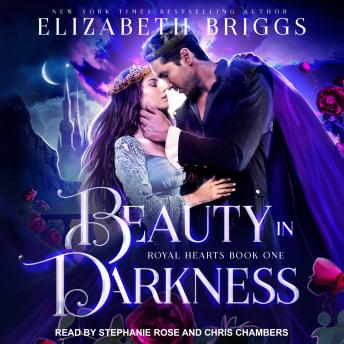 They've been enemies their entire lives, until an arranged marriage sparks a passion they can't ignore . . .

When Princess Rose is forced to marry the handsome, brooding wizard king, she's whisked away to his foreboding castle without even a chance to say goodbye to her family. She soon discovers her new home holds dark secrets that threaten the entire land, secrets no one dares speak of-and her mysterious husband is at the center of them.

King Raith may have taken a bride to end a needless war, but after his former wife's murder he has no interest in falling in love again. As Rose defies him at every turn, her beauty and boldness tempt him to open his heart a second time, and every day it gets harder to resist her. But she must never discover the curse threatening the kingdom-or the dark depths of Raith's soul.

As their desire for each other grows, Rose will do whatever it takes to uncover the truth about Raith's past and the shadows spreading across the land. When darkness threatens to tear them apart, they'll have to find a way to stop it together-or doom their kingdom forever.

I have enjoyed listening to other series by this author so when I saw this one I was eager to listen to it. The storyline is original and well thought out and the characters are wonderfully well defined. The storyline featured magic, betrayal and war as well as a slow burn romance between Raith the King of one realm and Rose a Princess of another who find themselves married before they get a chance to know each other. Their marriage was a political one it's purpose to stop a war which it did, but Raith still mourns the death of his first wife which was brought about by the father of his second wife Rose. I enjoyed the storyline which kept me fully engaged and wanting to know what was going to happen next, for that reason I will not give away any more of the plot except to say, nothing was as I expected, it's an interesting and original story which was beautifully narrated by Stephanie Rose and Chris Chambers.

The book wasn't one of those you could predict the ending until you got there. So, aside from the typical stuff that always happens between forced couplings, the ending had a nice twist and made it a refreshing change to the usual. However, the female narrator ruined it for me. She paused after [practically] every word and that became very annoying, so I almost stopped listening; the words didn't flow smoothly from her mouth, she had no groove, and I could feel her dissatisfaction that she had to read this book. The male narrator was decent. Anyways, I would recommend you read this one for yourself rather than listen to it, but for the narration reason only, if you're bothered by terrible narrators that is, since it is a fairly good book with a nice twist at the end.

I loved this, entertaining, magical story. It’s not something I’d usually choose but I was ready for a different read. I’d recommend.

Love the story - hate the female narrator! The male one is okay, but not amazing. But the way the female narrator clips her words is seriously off putting. I really got into the story so persevered, but think I'll have to get the next book from the library to read rather than listen to. Don't think I can get through another book listening to her!

The flow of the story was fast paced. I enjoyed having both a female and male narrator as that really added to the story. Definitely was a fun listen!

I'm ready for the next book I enjoyed the narration and storyline kept me wanting more.