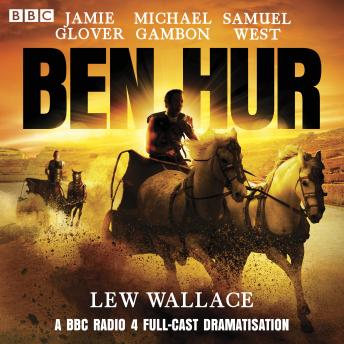 Judea, 26 AD. Two men's lives run almost in parallel. One is a prince of Jerusalem. The other is known as 'He that is born King of the Jews'...

When Judah Ben Hur visits his childhood playmate Messala, now a Roman tribune, he hopes to rekindle an old friendship. But their meeting has devastating consequences. Betrayed and falsely accused of attempted murder, Judah's property is confiscated and his family arrested - and he himself is sent to the galleys. En route to the sea, he meets a carpenter's son, who gives him water - and looking into the man's eyes, he almost loses his desire for vengeance.

Freed from slavery years later, Judah travels to Antioch, where he hears of a King who will lead the Jewish people, and vows to go and fight for him. He also encounters his former friend Messala once more, and seizes the opportunity to crush him in a high-stakes chariot race. Emerging victorious, he journeys back to Jerusalem to find his lost mother and sister, and raise a resistance force against Rome. But as his life intersects with that of the King he champions, he comes to realise that Jesus of Nazareth is not a warrior, but a saviour - and that the path to his kingdom lies through forgiveness.

First published in 1880, Ben Hur was famously adapted as a 1959 blockbuster starring Charlton Heston, which won a record 11 Oscars. This spectacular, cinematic dramatisation boasts a stirring score by award-winning composer Wilfredo Acosta, and is brought to life by a stunning cast including Julian Glover, Samuel West and Michael Gambon.

This title is due for release on July 14, 2022
We'll send you an email as soon as it is available!