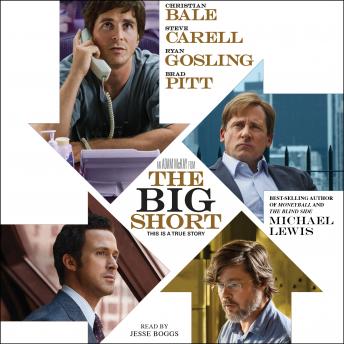 The Big Short: Inside the Doomsday Machine

When the crash of the U.S. stock market became public knowledge in the fall of 2008, it was already old news. The real crash, the silent crash, had taken place over the previous year, in bizarre feeder markets where the sun doesn’t shine, and the SEC doesn’t dare, or bother, to tread: the bond and real estate derivative markets where geeks invent impenetrable securities to profit from the misery of lower and middle-class Americans who can’t pay their debts. The smart people who understood what was or might be happening were paralyzed by hope and fear; in any case, they weren’t talking.

The crucial question is this: Who understood the risk inherent in the assumption of ever-rising real estate prices, a risk compounded daily by the creation of those arcane, artificial securities loosely based on piles of doubtful mortgages?

Michael Lewis turns the inquiry on its head to create a fresh, character-driven narrative brimming with indignation and dark humor, a fitting sequel to his #1 bestselling Liar’s Poker. Who got it right? he asks. Who saw the ever-rising real estate market for the black hole it would become, and eventually made billions of dollars from that perception? And what qualities of character made those few persist when their peers and colleagues dismissed them as Chicken Littles? Out of this handful of unlikely—really unlikely—heroes, Lewis fashions a story as compelling and unusual as any of his earlier bestsellers, proving yet again that he is the finest and funniest chronicler of our times.

Michael Lewis, “is the finest storyteller of our generation.”—Malcolm Gladwell

Michael Lewis has the most remarkable talent for breaking down part of a virtually impenetrable system (investment banking) into threads that can be followed as they are knit and then unraveled. I won't say it "makes sense," as the whole point of this book is to say that none of what led to the housing bubble and subsequent collapse of the market (or any Ponzi scheme, for that matter) "makes sense" to any rational person. One begins to understand why very few understand the market these days and why even regulators and legislators can't seem to get their acts together. It's discomforting. It makes one think twice about trusting one's paycheck and savings to banks. The angst this book causes the reader is precisely why everyone should read it.

Absolutely loved it! Better than the movie!

Better than the movie.

Infuriatingly satisfying. Michael Lewis tells a story that very few people understand, or even want to hear. But it is an important story, and its importance is perfectly translates through Lewis's writing. The reader comes to both hate, admire, and pity the few who saw this collapse coming. Ideal for anyone who lost something from this disaster, as well as for young people who wish to know what NOT to do with their economy. A great lesson on the selfishness and ignorance of the people dominating our nation's economy.

So well done. This topic can be hard for the average person to understand but the way the story was told was so brilliantly done anyone can get it. I lived though this story in NYC on the real estate side I loved the book.

Too complicated a book for audio, need hard copy to review and understand all the complicated tranches and instruments referred to in the book

Excellent, informative, clever and a great deal of humour.

This is a fascinating book, and sheds a lot of light on the financial meltdown.

I constantly wanted to hear this book. It was fantastic to hear how we got into this terrible economic mess and the mix of people who made a fortune predicting it. I think I'm still mad at those how created the problem and that they were rewarded and not punished!!!

I don't pretend to know how big finance works. I have no idea how the likes of Goldman Sachs et al does business or make their money. This book did not help educate me at all on these things. What it does do, and this is important, is to show how complex, enigmatic, uncontrolled, unregulated and unsupervised our economic system is. Immense and dominating monetary power is in the hands of a relatively few firms and in 2008 they brought the system to its knees. This will happen again; it's just a matter of time.

This title is due for release on March 15, 2010
We'll send you an email as soon as it is available!